Esha Deol's recent pictures and videos went viral for all the wrong reasons. Online trolls compared her looks with her brother Bobby Deol and it caught Esha's attention. She has now given befitting reply to trolls.

A few days ago, Esha Deol was spotted on the sets of her upcoming noir action thriller series Invisible Woman, which also stars Suniel Shetty. She was seen sporting her character look in a red T-shirt, which she wore under a peach coloured shirt and brown pants with matching boots. She was sporting bangs and needless to say, she looked beautiful. She obliged the shutterbugs with photographs. However, her pictures and videos went viral for all the wrong reasons. Online trolls compared her looks with her brother Bobby Deol and it caught Esha's attention. She has now given befitting reply to trolls. Also Read - Animal: Ranbir Kapoor starrer goes on floors; costar Bobby Deol reveals all about release date [Exclusive]

Taking it to her Instagram stories, Esha shared her viral picture and wrote, "Recently while shooting for an ACTION sequence for my upcoming project in Mumbai. I was walking towards my vanity van & happened to get papped by default.... Later to see my video going viral & getting trolled for the way looked! Well to begin with my hair had to be messy & I was sweating doing all the action. And yes ! so if I do look like my brother @iambobbydeol In that hairdo ..... I'd like to thank you for the compliment." Also Read - Esha Gupta gives the likes of Kim Kardashian a run for their money with her latest mirror selfie 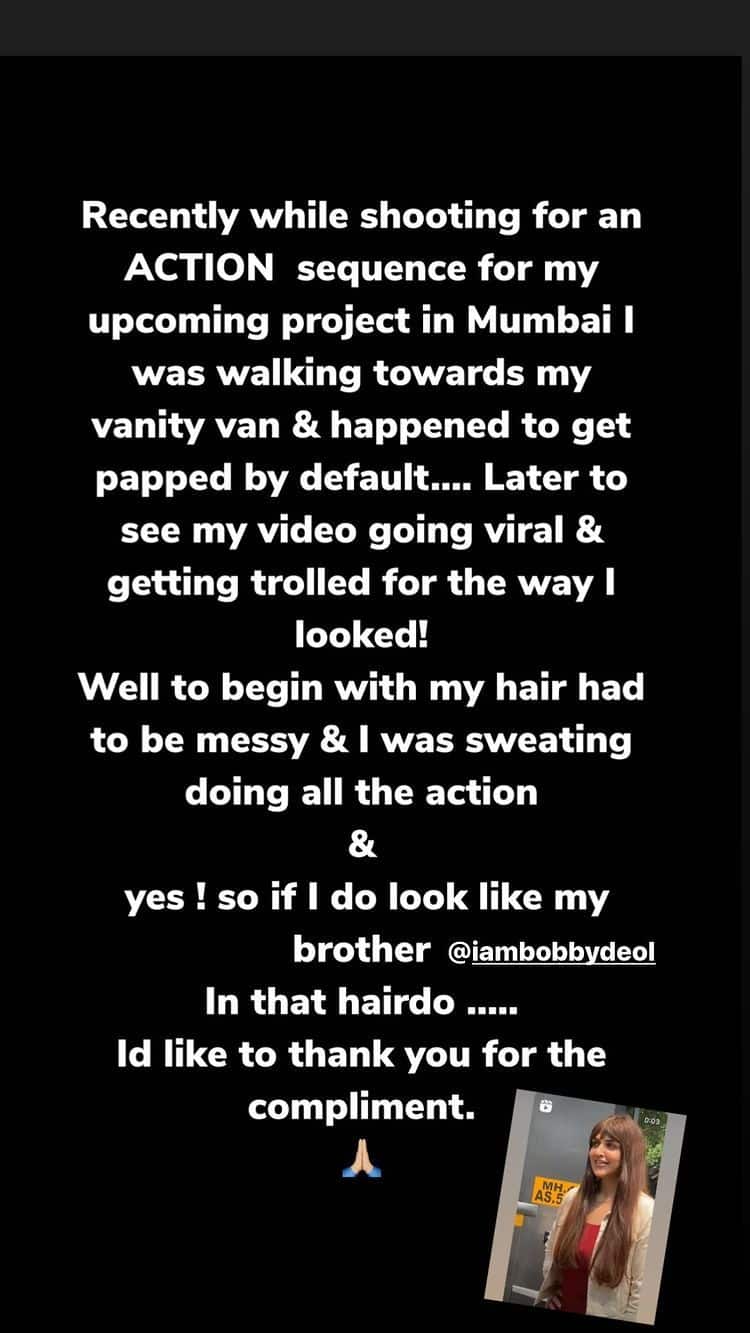 Also Read - Raajneeti 2: Aashram director Prakash Jha opens up on the sequel; confirms the script 'has been written' [Exclusive]

Earlier, Esha had shared her excitement to be a part of Invisible Woman. "A project like this is truly fantastic. It explores an unusual genre. The story has mystery, intrigue and great scope for histrionics. And to work with Suniel Anna again is an absolute delight . Shooting has begun and it feels just great." The other actors in the series are Rahul Dev, Sudha Chandran, Chahat Tewani, Karanvir Sharma, Mihir Ahuja, Gargi Sawant, Mir Sarvar, Teena Singh, Siddharth Kher and Enakshi Ganguly.

At the age of 18 when she made her debut in Bollywood with Koi Mere Dil Se Poochhe, she bagged four awards as most promising debutant actress. The success followed and she became the overnight sensation with the tag Dhoom girl. She made her digital debut with Rudra: The Edge Of Darkness, alongside Bollywood superstar Ajay Devgn. Rudra is an Indian adaptation of the British psychological crime drama Luther. The show is directed by Rajesh Mapuskar and it is also starring Raashi Khanna, Ashwini Kalsekar, Atul Kulkarni among others.