Ethereal has a new synonym and it's none other than Neerja star Sonam Kapoor! - view HQ pics!

She slays the double pallu sari with panache! Read on...

Sonam Kapoor just shut all the people who thought she was only fit for princess-like roles! Clearly, Neerja surpassed all the expectations of the actress and shone in the eyes of viewers. One of the most challenging films for her and she triumphed! So while the diva is riding high on the success and the brilliant response she is getting for her film, Neerja, she always makes sure that her style quotient is in check. I must say, the fashionista during the promotions of Neerja, sometimes did stand out in a bad way for her faux pas (hard to believe but even the best of people make mistakes!) but she cleaned up pretty well for all the bad choices with this WOW outfit. Also Read - Ellipsis Entertainment issues a statement addressing sexual harassment charges on Atul Kasbekar

The diva looked exquisite in this Abu Jani Sandeep Khosla sari with the double pallu that she donned for the second time (by that I mean the style and not the outfit). Now the whole double pallu style might seem a bit cumbersome as you have to constantly keep holding both the pallus well but Sonam here has proved it that she can do and don almost anything! She looked angelic and I especially loved the faded hue and oh the hair, the wavy locks fell splendidly on her shoulders. Also, the back of the blouse was also quite interesting and full points there to have put up such a sexy fashion game! Also Read - Rishi Kapoor reacts on Nirav Modi's PNB Fraud Case 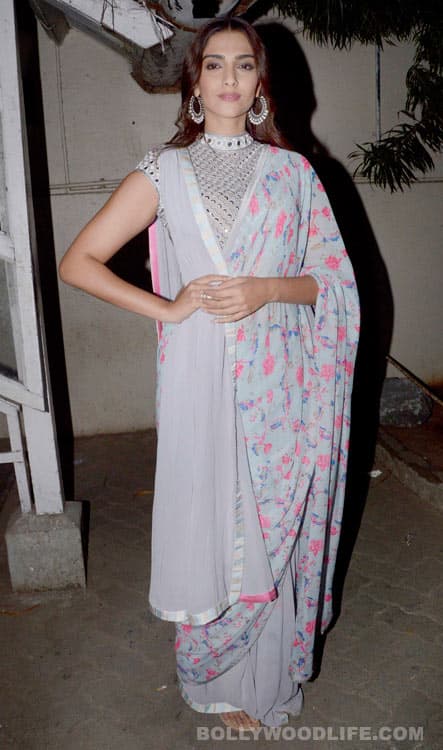 So while our Neerja actress went for the ethnic look, sister, Rhea Kapoor resorted to going all chic and casual. She too was spotted at Mehboob Studio in a Victoria Beckham top with a bow that looked damn chic. But she just couldn't beat sister Sonam's style game as the diva just stole the show with her ensemble! 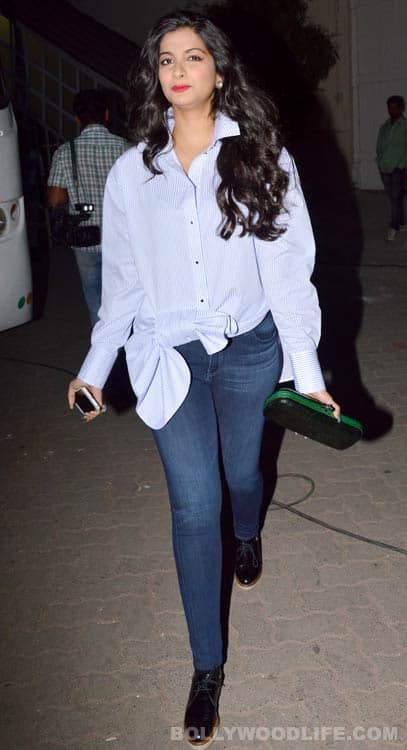 What do you think of Sonam's attire? Tell us in the comments section below!