Disclaimer: This is a fake FB wall…Please don’t waste your precious time searching on Facebook for this conversation!

Shah Rukh Khan celebrated his 50th birthday this Monday, and the party hasn't stopped yet! While we got the Fan teaser at the start of his birthday celebrations, yesterday was spent entirely on one pic that broke the internet - Shah Rukh Khan and Salman Khan hugging each other, Sultan style! Also Read - Deepika Padukone's Padmavati starts rolling on a musical note!

As we checked Shah Rukh Khan's Twitter timeline yesterday, we saw many stars from film and television industry wishing him and he had replied to each one of them with a personalised message. However, among the wishers, we failed to see Shahid Kapoor, which is no surprise, since the actor is mostly addicted to Instagram. Shahid, who is lying low, after the debacle of the much hyped Shaandaar, is currently shooting for Vishal Bharadwaj's Rangoon where he will be seen with Saif Ali Khan and Kangana Ranaut in a Casablanca kind of love story, set in World War II. Also Read - IIFA Awards 2016 LIVE: Priyanka Chopra's melodious singing will leave you AMAZED - watch video!

So for fun's sake (and that also means we don't have anything great to do), we decided to imagine a situation when Shahid Kapoor wishes King Khan on Facebook, Shaandaar style, and gets mocked upon by the birthday boy, with Salman Khan also pitching in. Also Read - Bajirao Mastani and Befikre have set Ranveer Singh APART from the rest of the actors, suggests trade expert! 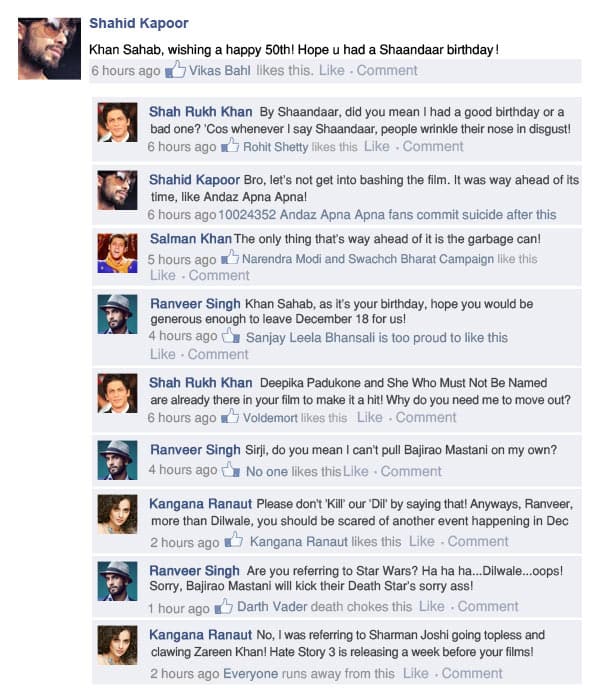 Second Disclaimer: The above article is meant to be taken in a light manner. Sometimes, a little laughter is seldom a cause for worry!