Hrithik Roshan and Tiger Shroff shared screen space in 2019's War where they grooved together on Jai Jai Shiv Shankar.

Well, we all know that Tiger Shroff idolizes Hrithik Roshan. In fact, in all of his interviews, the Heropanti star said that HR was the inspiration because of whom he entered the film industry. Tiger recently conducted a Q and A session with his fans, where one of the users asked him, ''Who is more better dancer u or hrithik roshan sir''. Tiger noticed the question and give a heart-winning reply as he wrote, ''@hrithikroshan hands down ba**s to the floor is way better''. Also Read - Fan asks Amitabh Bachchan the reason behind endorsing paan masala; here’s what the KBC 13 host replied 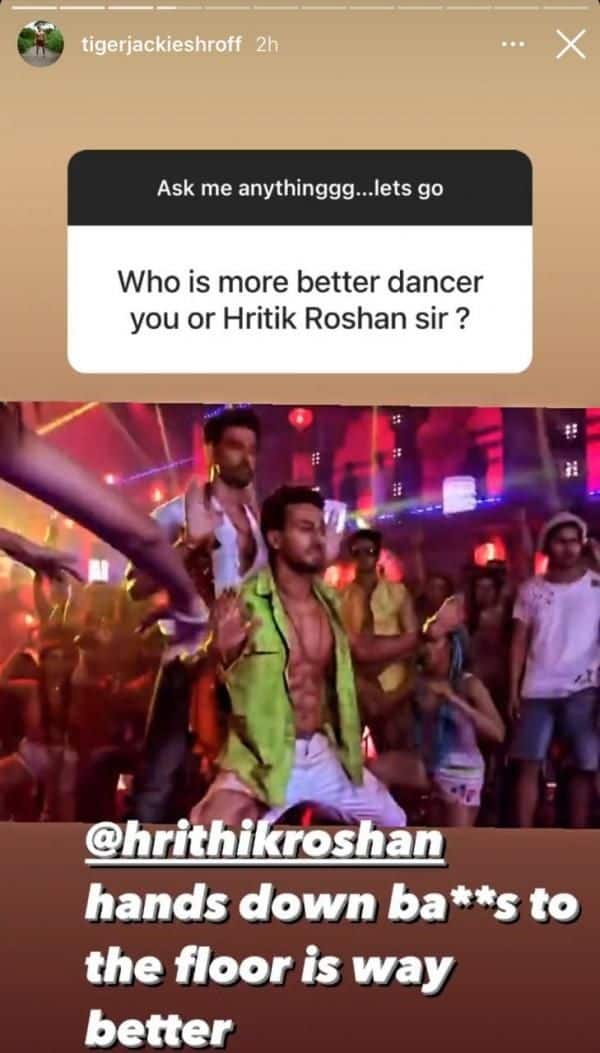 For the unaware, Hrithik Roshan and Tiger Shroff shared the screen space in 2019's blockbuster, where the duo impressed us with some amazing moves on the track Jai Jai Shiv Shankar. The action-entertainer, which was directed by Siddharth Anand, earned over Rs 315 crore at the ticket windows and also featured Vaani Kapoor, Ashutosh Rana, Anupriya Goenka and others in pivotal roles. The film still holds the records of the highest opener of all-time in Bollywood. Also Read - Bollywood celebs who LEAKED their WhatsApp chats in public

Meanwhile, Tiger Shroff will be next seen in Heropanti 2, which also features Tara Sutaria in a lead role. Talking about the film, it marks Tiger's third collaboration with director Ahmed Khan after Baaghi 2 and Baaghi 3. It will be produced by Sajid Nadiadwala under his banner Nadiadwala Grandson Entertainment. While the film was scheduled to hit the screens on July 16, the second wave of COVID-19 has forced the makers to push the film at the box office.

On the other hand, Hrithik Roshan recently started the shooting of Siddharth Anand's Figher along side Deepika Padukone. As per the reports, the makers of the film are planning to make the film on a budget of Rs 250 crore, which makes it one of the costliest ventures of Bollywood. So, are you excited for these big-budget ventures? Tweet to us @bollywood_life.