Fans can't decide if Kapil Sharma was drunk tweeting or his account was hacked!

ICYMI, Kapil Sharma went on an abusive rant against the media for covering Jodhpur court's verdict on the 1998 blackbuck poaching case on Salman Khan.

ICYMI, Kapil Sharma went on an abusive rant against the media for covering Jodhpur court's verdict on the 1998 blackbuck poaching case on Salman Khan. The very media that was hailing the comic actor for a terrific comeback on TV with Family Time, just a day ago. Ouch, guess, success is not everyone's cup of tea. The controversy king not only hurled abuses like 'mother*****r', but also went on to urge the media to reveal the sources for their stories, which would mean going against the journalistic integrity. Moving on, fans were very quick to notice these abusive tweets on their timeline and reacted as one would expect. Also Read - Bigg Boss 15: Do you agree with Salman Khan that Umar Riaz is very aggressive and violent? Vote now

Of course, laughter ensued in the comments section but not without concern over Kapil. Some fans contemplated if Kapil was drunk while sending out these texts to the platform, which boasts of 12 million followers. Some wondered if Kapil's account was hacked because who in this world would tweet this irresponsibly to their 12 million followers (of course other than Donald Trump). Check out a few fan reactions that we were able to screenshot before Kapil Sharma hit the delete button. Also Read - Bigg Boss 15: Viewers call Rashami Desai 'winner material' for calling out Abhijit Bichukale's behaviour in front of Salman Khan – read tweets 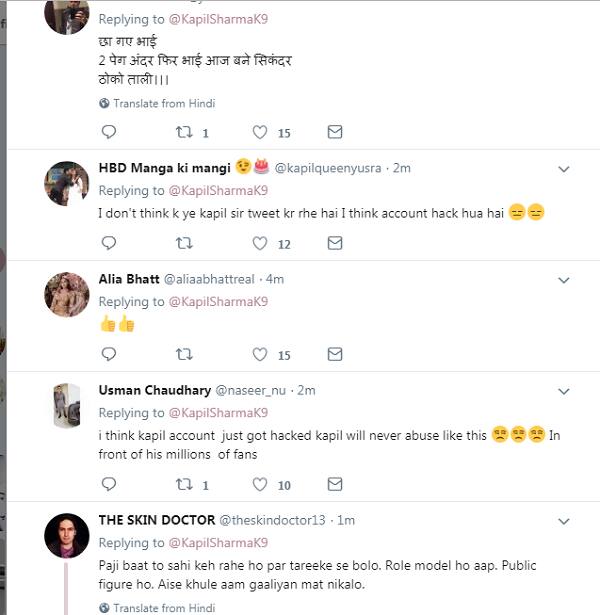 Kapil refuses to let controversies around him die down. Fans are still not able to wrap their head around the fact that long-term collaborator Sunil Grover is still not on talking terms with Kapil, after last year's fiasco. And a couple of controversies here and there. And we are already talking about a new one. Also Read - Bigg Boss 15, Weekend Ka Vaar, Live Updates: Rashami Desai nominates Abhijit Bichukale to be guilty of name-calling and using foul language