Shah Rukh Khan has charmed his way to the top and proved why he's King of Romance. Last week during the Janmashtmi weekend, we ran a poll about who is the favorite Krishna of Bollywood. And fans have voted for SRK as the ultimate Krishna of Bollywood (with 38 percentage votes). Along with Shah Rukh there were Salman Khan, Akshay Kumar and young stars like Ranveer Singh and Ranbir Kapoor too competing for this title. Also Read - From Shah Rukh Khan to Shilpa Shetty Kundra: 8 Bollywood actors who have successful side businesses

Fans loves the on screen as well as off screen persona of SRK, that's the reason SRK is termed as the King of romance. His onscreen persona is of the kind that can make any girl fall in love with him instantly, the proof of which even Salman Khan endorsed in a scene in Sultan. His off screen persona is nothing short of what he is on screen. Irrespective of the gender, wherever he goes, he is always surrounded by people, just like Lord Krishna. Also his life’s philosophies are second to none and inspires people all around. Another trait Lord Krishna was known for. Remember “Gita Saar“? Also Read - Shah Rukh Khan, Salman Khan, Akshay Kumar should be thankful to God; their era is ending: Priyadarshan

Akshay Kumar came close second with the 30 percent votes and was termed so because in OMG! Oh My God he played Lord Krishna and was much celebrated for his portrayal. Even his choice of films mirrors Lord Krishna. How easily he shifts from a serious role to that of a playful one. Similar to what Lord Krishna’s character is, something we’ve seen and read in various shows and books respectively.

Salman Khan was at third position with 24 percent votes, he was termed as lover Krishna because Salman Khan is one man who doesn’t play by the rules, just like what Lord Krishna did during Mahabharat. If you mess with Salman Khan, you have to pay for it. Yes, Viviek Oberoi, Arijit Singh I am looking at you. And of course how can we ignore Bhai’s various love affairs.

The young stars are far behind the senior super stars, Ranveer Singh is one energizer bunny and he is loved by one and all. He is all playful and mischievous and can bring the best in people whenever he is around. One of the most famous trait of Lord Krishna. But still that couldn't get him much votes and was at fourth position. And Ae Dil Hai Mushkil actor Ranbir Kapoor despite his Casanova image took the fifth spot.

Check below the results of the poll: 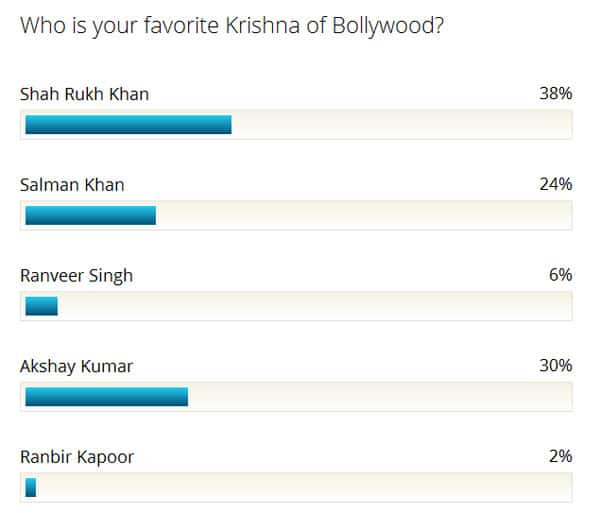