Malaika Arora and Arjun Kapoor's marriage is the next big fat Indian wedding in Bollywood that people are waiting for! Fans want this 'IT' B-town couple to seal the deal soon but they are no in rush to get married. While we all wait for their big day, Malaika and Arjun are setting major couple goals by each passing. Malaika's social media posts are filled with oh-so-cute comments by India's Most Wanted actor and vice-versa. Quite recently, the actress set the internet on fire with her stunning pictures from her Maldives vacay and today was just another day. Malla, as she is fondly called by her loved ones, shared new oh-so-hot pics from her vacay. She is seen snorkelling underwater wearing a bikini. Also Read - It’s AWKWARD! 5 pictures of Arjun Kapoor, Rakhi Sawant and others that will make you go ROFL

The caption to her Instagram post read, "The stillness. The calm...... it’s meditation. #Indianocean #mermaid #mytime." However, Farah Khan, who is close to her, immediately asked her who clicked her pictures. And needless to say, Malaika's fans quickly added her beau Arjun Kapoor's name. While the couple is not in a hurry to tie the knot, their fans are way too excited for their wedding. Also Read - Arjun Kapoor-Parineeti Chopra's Sandeep Aur Pinky Faraar, Shah Rukh Khan's Devdas, Aamir Khan's Rang De Basanti and more films that saved dying careers [Part 1] – view pics 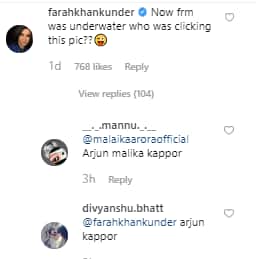 Recently, in an interview with DNA, Arjun Kapoor finally broke silence on his wedding rumours He said, "No, I am not (getting married in June). I’m 33 and you have to take my word when I say, I’m in no hurry to get married." However, the actor did admit that Malaika Arora is special to him. When he was asked to say more about her, the actor added, "I don’t have anything to discuss. I have nothing to hide. What the world is seeing, they are seeing. However, I have no desire to justify my personal life beyond a point. It is important to have good people around me and I feel fortunate that I have such individuals in my life."

That's all about Arjun Kapoor's personal life. On the professional front, the actor was last seen in Namastey England which proved to be a box office dude. Up next, we will see Arjun Kapoor as Prabhat Kapoor in Raj Kumar Gupta's India's Most Wanted. The film revolves around tracking a terrorist in a secret mission and arresting him without firing bullets. It also pays tribute to unsung heroes of our society and releases on May 24, 2019.