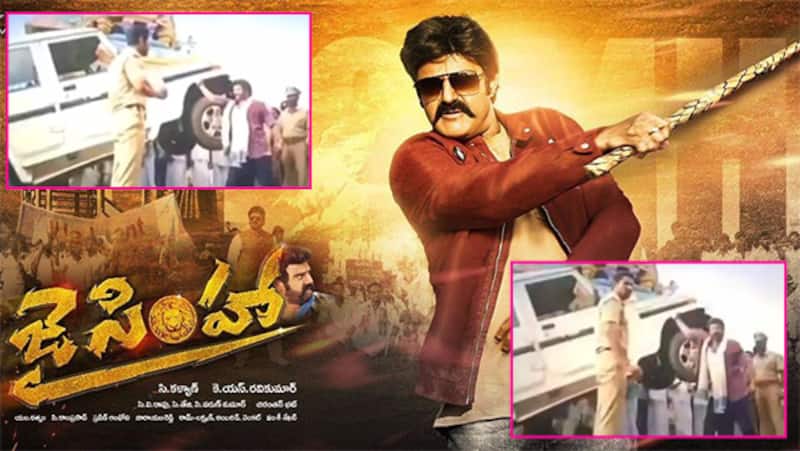 This Pongal, NandamurI Balakrishna's Jai Simha is making waves at the box office. The commercial entertainer is currently rocking the box office. It's a typical Balayya film with Andhra's favourite hero performing gravity defying stunts, too-good-to-be true-antics. Obviously that never gets old! While the film continues to take the box office by storm, another topic took over social media. In the movie, there is a certain scene where Balayya is seen lifting a Bolera single handedly with everyone watching in awe. Since it's Balayya, it almost looks believable. Now one of them tweeted out to Anand Mahindra stating that Bolera has now become famous courtesy the stunt. "@anandmahindra, Sir, this is worth to be in your collection. Pls do watch this. #Bolero is literally trending in Telugu Speaking states.' Also Read: Jai Simha first look: Although repetitive, Nandamuri Balakrishna’s mass avatar creates the right kind of drama Also Read - Samantha Ruth Prabhu, Kajal Aggarwal, Nayanthara and more South Indian actresses who are bikini bombshells

Anand Mahindra who is known to be a wizard with words came back with a humorous response - 'Haha. Now all our service workshops won’t need any hydraulic lifts anymore to do Bolero check-ups!!" Now that's what you call a witty response! This kind of stunt definitely called for a response like this one. But then again, Anand Mahindra's response did not go down well on Balayya's fans. They took offence and tweeted out against him! Also Read - Shruti Haasan's PCOS and endometriosis, Shenaz Treasurywala's face blindness and more Bollywood actors who faced severe health issues

Sir I never expected such a big personality reacting to some movie trolls you lost your respect, BTW Balakrishna is not only hero and ,MLA, he runs cancer hospital which is in 2nd place in India and offers free treatment for poor
& creates awareness campaigns for breast cancer.

Have some sense. Think before posting a pirated version of clip when the movie is still running in theatres. Useless tweet

Instead of reacting to some useless fans trolling.. Please concentrate on your useless service workshops and improve service to your customers...Don't degerade your post by involving yourself in these fans fights.. so pity on you

Sir these comments doesn’t fit your stature about #Balakrishna ! It’s just a movie ! Look at your ads about all Mahindra vehicles !!
He has huge fan base in rural areas and hurting them only impact especially your rural business around #Bolero !!

What do you think? Was this that kind of comment to take offense to or was to it be applauded for its quick wit? Do tell us what you think in the comment box below. Jai Simha is a 2018 Pongal release starring Nandamuri Balakrishna and Nayanthara. It was directed by K. S. Ravikumar. Also Read - Jawan MAJOR UPDATE: Shah Rukh Khan to play DOUBLE ROLE in Atlee film; Deepika Padukone, Nayanthara both set to romance SRK?