Trisha took to her social media pages and posted a picture with a dolphin in a swimming pool but that didn t go down too well with few netizens.

Fans trolling, being critical and ruthless towards insensible things done by any celeb is not a new thing. Time and again, we have seen these things happening, especially on social media. And the latest target is Trisha Krishnan who faced the wrath of the fans for posting a picture with a dolphin. Trisha took to her social media pages and posted a picture with a dolphin in a swimming pool, but that didn’t go down too well with few netizens. Many fans felt that dolphins need to be in an aquarium and not in a pool. Few also were quite critical of it and said that she doesn’t deserve to be the ambassador for UNICEF, a title she was conferred recently. Also Read - Nadigar Sangam BANS producer of Trisha-Vijay Sethupathi starrer 96 over unpaid dues to actors – read full statement here

"Hey I thought you were an animal rights activist. I don’t think dolphins should be in aquariums," [sic] commented one user referring to her association with PETA. "Seriously??!! Why is a captive dolphin so attractive to you?!" [sic] said another user quite seriously. It also seemed that comments on that post by Trisha were deleted and users blamed the actress for resorting to such act. Also Read - 96 Box Office report: This Trisha-Vijay Sethupathi starrer romantic tale has an emphatic first day

Believe in love at first sight?❤️

Check out all the reactions here… Also Read - 96 Public Review: This Trisha Krishnan and Vijay Sethupathi starrer romantic saga is being showered with love 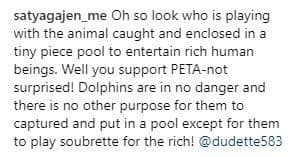 "Oh so look who is playing with the animal caught and enclosed in a tiny piece pool to entertain rich human beings. Well you support PETA-not surprised! Dolphins are in no danger and there is no other purpose for them to captured and put in a pool except for them to play soubrette for the rich!" opined another user being quite critical of her picture.