Fantastic Beasts and Where To Find Them Movie Review: J.K. Rowling and David Yates take you through a ride that needs a little more magic

Eddie Redmayne and Colin Farrell are the showstoppers in this magical ride set by J.K.Rowling and David Yates. 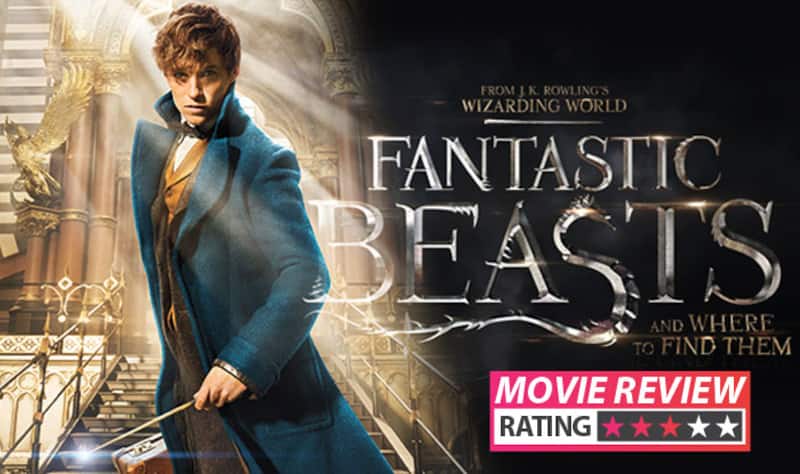 After Doctor Strange, Fantastic Beasts and Where To Find Them is one movie I was really looking forward to! I'm sure all you Potterheads out there, too, couldn't contain your excitement. If you're planning to skip the movie because you haven't seen the Harry Potter series, you won't miss a thing in the movie. You will certainly miss out a lot in life, but not in the film. Eddie Redmayne plays the role of Newt Scamander, who is a much better version of Hagrid and not just because of the looks. You will hardly be able to take your eyes off him. Also Read - BTS' Kim Taehyung, Blackpink's Lisa and Park Bo-gum steal thunder at Celine's Fashion show in Paris, V interacts with Eddie Redmayne and more

There are a lot of new terms and words in the film that will make take you back to Hogwarts. For example, non-magical people are referred to as no-maj instead of muggle. Set in 1920s, this story takes place much before The Boy Who Lived and He Who Must Not Be Named were born. If you remember the story of the Deathly Hallows vividly, you'll know how Albus Dumbledore had fought Gellert Grindelwald to win the elder wand. This story is set just around that time, but without Dumbledore. David Yates, who has given us the last four Harry Potter movies, creates magic with J.K. Rowling yet again but it seems like the movie could do better with some more magic. I am not sure if I could watch the film multiple times like the HP ones though. (ALSO READ: Fantastic Beasts and Where to Find Them final trailer is majestic, spellbinding and JUST AWESOME!) Also Read - 7 Kadam Review: Ronit Roy and Amit Sadh are the only saving grace in this emotion and action less sports drama

The story takes place in New York when Newt Scamander (Eddie Redmayne), who is a magizoologist from London and comes to NYC with a briefcase full of magical creatures to buy a treat for one of his pets. Yes, it's exactly what you think. There is a whole new world inside the briefcase but that shouldn't be surprising for all you potterheads. Hell breaks loose as a few of them escape. This is also the time when the American Ministry of Magic is debating about not being able to capture Grindelwald. Newt Scamander, clumsy as he seems, bumps into Jacob Kowalski (Dan Fogler) who tags along with him. Porpertina Goldstein, also called as Tina, (Katherine Waterston) is a former auror, who was fired from her position after accidentally exposing herself to the 'no-maj'. Tina does everything she can to prove her worth and get back in the investigating team of the Ministry.

Tina even plays an irritating snitch who tells on Newt to the Ministry only to be sentenced to death. Colin Farrell plays Percival Graves and man, you're going to love him! Mr. Graves is up to something sneaky but in the good books of the Ministry. He is after an obscurial, which is a dark magic created by young witches and wizards who are trying to suppress their magic. In other words, it's a horcrux that they create unintentionally but it doesn't make them immortal. In search of his magical beasts that he accidentally let out of his briefcase, Newt Scamander sets out on a journey to make things right.

Now, I am not giving you any spoilers but the climax of the movie, which will be Grindelwald's (Johnny Depp) entry will surprise you. Hint: Think Harry Potter and the Goblet of Fire. *wink*

The visuals in the film are so beautiful and appealing, it beats the visuals of the HP series. Eddie Redmayne's portrayal of Newt Scamander, who is a Hogwarts dropout and without a doubt, Dumbledore's favourite student, is one of the only things I loved about the film. There are quite a few instances in the film that will make you laugh or at least smile. If you're a Potterhead, you'll keep connecting words, characters and instances to the HP series, which is kind of fun.

Fantastic Beasts and Where To Find Them does not give you a feeling of nostalgia and I was hoping for one. Eddie Redmayne, Colin Farrell and Don Fogler were the only ones who kept the show going. The other actors were too bland. Johnny Depp's entry at the end of the film, saves the otherwise dull scene but only lasts for a few seconds.

I cannot watch the movie multiple times but if you are a Potterhead, you must definitely watch it once.