The grand finale of Femina Miss India 2016 that is ongoing at the Yash Raj Studios in Mumbai is a star studded affair.

The grand finale of Femina Miss India 2016 that is ongoing at the Yash Raj Studios in Mumbai is a star studded affair. Also Read - Shanaya Kapoor's luxurious home in Mumbai is no less than a princess' royal castle from a fairy tale – view inside pics

Arjun Kapoor, Varun Dhawan and Karan Johar, who are among the early birds arriving for the show have taken social media by storm. How you may ask? Well all the three dapper looking men have come in one frame to take your breath away! Also Read - Arjun Kapoor opens up on his 'health condition' and recent massive transformation; shares why he faces difficulty to achieve quick results

Karan is also the host of the night which will see amazing performances by Varun Dhawan, Shahid Kapoor, Tiger Shroff and much more. Among the expected guests is Fan star Shah Rukh Khan, who has been busy giving interviews for his forthcoming film. Well with soo many stars, these 21 ladies are bound to be star struck tonight. What do you think? Also Read - Filmy Friday: When Shahid Kapoor reprimanded Arjun Kapoor for his comment, 'Ishaan Khatter keeps buzzing around Janhvi Kapoor' The format of the pageant has 21 contestants competing for the crown of Miss India. Out of those 21 contestants, top five participants will enter the final question and answer round. The winner of the Miss India 2016 title will then be judged by designer Manish Malhotra, Miss World 2015 winner Mireia Lalaguna, actress Amy Jackson and Sania Mirza among others. Sounds tough eh?

Here's a picture of the entire panel of judges set to grill these contestants to perfection. Check it out! Also let us know can you spot who's who? Comment below! 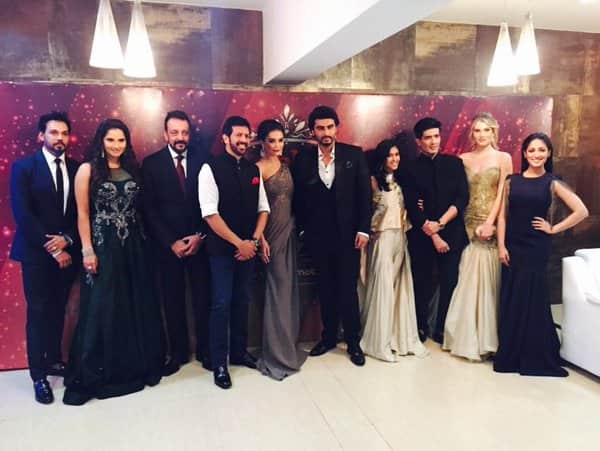