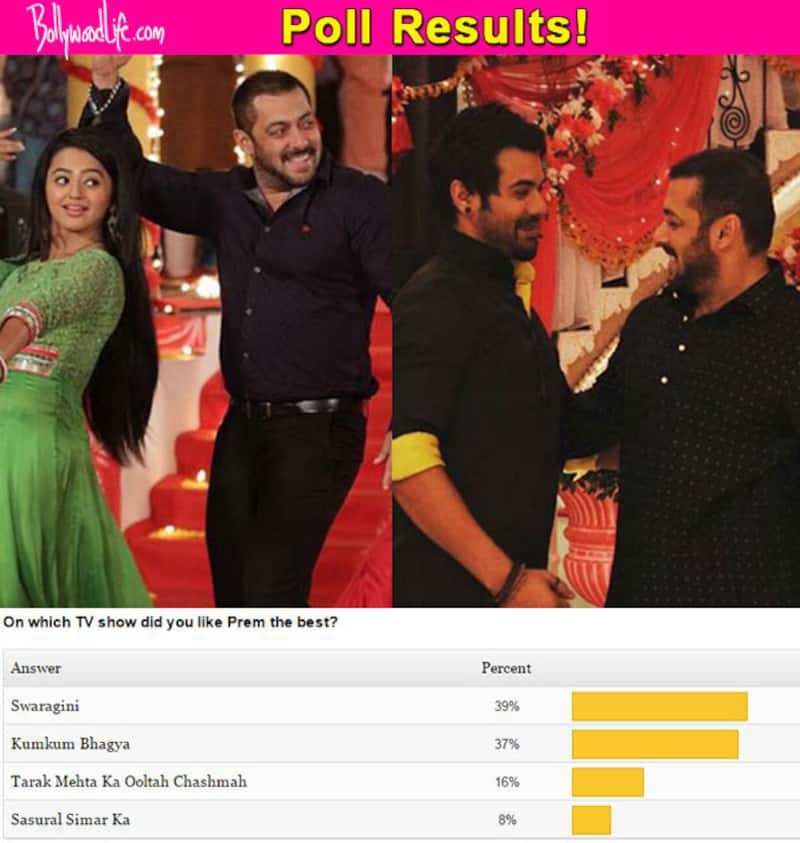 After a see-saw battle between Kumkum Bhagya and Swaragini, fans have declared that they enjoyed the superstar's presence on Swaragini a lot more. The actors had made special appearances on various shows to promote Prem Ratan Dhan Payo. As fans will remember, he and Sonam met Swara (Helly Shah) at the temple and explained to her what true love. Sonam was seen teasing Swara about Sanskaar (Varun Kapoor) and how good their names sound together. Also Read - Shruti Haasan's PCOS and endometriosis, Shenaz Treasurywala's face blindness and more Bollywood actors who faced severe health issues

When we started the poll, Swaragini was leading by a fair margin with Tarak Mehta Ka Ooltah Chashmah trailing it. However, Kumkum Bhagya picked up after a few days and the difference between it and Swaragini was marginal. Also Read - Shahid Kapoor-Mira Rajput, Ranbir Kapoor-Alia Bhatt and more: Bollywood couples whose passionate kiss in public went viral

As we know, Salman came to Abhishek's (Shabbir Ahluwalia) house on Diwali day and had a gala time with the guests. He advised Abhi to make amends with Pragya (Sriti Jha) by showing love towards her. Sonam also spoke to Pragya about her problems with Abhi. Also Read - Swara Bhasker, Uorfi Javed, Shah Rukh Khan, Salman Khan and more celebs who received death threats

Tarak Mehta Ka Ooltah Chashmah took the third spot. His appearance on the show brought in Diwali cheer for the residents who were in a bit of a spot due to the renovations in Gokuldham society. He introduced Sonam to all the residents and also did the garba with Dayaben (Disha Vakani).

Sasural Simar Ka was on the fourth spot. We guess the actor's fleeting appearance on the show did not create much interest amongst his fans. Prem landed up to save Mataji (Jayati Bhatia) and other members of the Bharadwaj clan who were trying to save Simar.