Five of my favourites 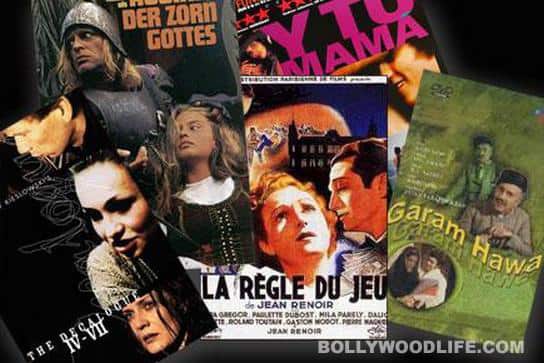 There are some films that never leave you. Here is my selection of a few unforgettable ones

In these troubled times, if you’re looking for solace in the movies, here, in no particular order, are some of my favourite ones:

The Rules of the Game

This movie is a standard fixture on lists of the 10 best movies ever made. Francois Truffaut called it “the film of films”. But when it first released in 1939, the film was a disaster. Audiences tore up seats, burned newspapers in protest, and the distributor forced Renoir to cut 33 minutes. When World War II broke out, the film was banned. Finally in 1956, 200 cans of outtakes were discovered and the film was restored closely to its original form. The Rules of the Game is ostensibly about several connected romantic intrigues that take place over a weekend shooting party in a chateau in the French countryside. A heroic aviator loves the wife of the chateau owner, who himself has a mistress. These complexities are repeated among the chateau staff. Through these seemingly frivolous dalliances, Renoir dissects the archaic French class system and paints a deeply insightful portrait of a world on the verge of collapse. But Renoir’s critique is seeped with grace and humanism, which is what makes the film a classic.

Y Tu Mama Tambien, which means ‘And your mother too’, was released in the US without a rating. It is a frankly sexual coming-of-age road movie. Two teenage buddies with raging hormones drive to a beach with an alluring older woman, who has a few secrets of her own. The drive becomes a journey of sexual and emotional discovery. It also becomes a journey into a Mexico that you won’t see in postcards. A fraying country of police checkpoints, drug busts, shanty towns and trash. Cuaron narrates an impudent, audacious and yet deeply moving tale.

This is a 10-part series of short films that were made for Polish television in 1988-89. It is considered by many critics as the greatest cinematic achievement of the decade. Each episode dramatises one of the Ten Commandments through the residents of a bleak Warsaw apartment complex. But don’t let the religious overtones dissuade you. Keislowski was too sophisticated a filmmaker to sermonise. In an interview, he had said: “It’s just a look at how difficult it is to live.” Each episode stands independently, but when viewed together, Decalogue is a work of staggering power. There are images here, including a seven-minute murder in A Short Film about Killing, that will haunt you long after the films are over.

Garam Hawa was the first film to explore the consequences of Partition. The film has an impeccable literary pedigree—Kaifi Azmi and Shama Zaidi adapted the screenplay from an unpublished story by Ismat Chughtai. It also has Balraj Sahni, arguably the finest actor of his generation. Sahni plays a Muslim shoemaker in Agra who doesn’t want to relocate to Pakistan, but his world is slowly ripped asunder by the tragic aftermath of a country cleaved apart. The shoemaker can only watch as a way of life ends, and a new, fractured world takes its place.

Aguirre: The Wrath of God

A hallucinatory masterpiece, it follows the suicidal trip that Aguirre, a 16th century explorer, makes down the Amazon River in search of El Dorado. Aguirre was shot in the Peruvian jungles with a fleet of rafts and a cast of 270 native Indians. At one point, Klaus Kinski, the magnificent actor who plays Aguirre, threatened to leave. Herzog said: “I told him that I had a gun with nine bullets, eight of which I would use on him, leaving the final one for myself. He understood that it was not a joke.” In his autobiography, Kinski described Herzog, with whom he made five films, as a “miserable, hateful, sadistic, cowardly creep”. Aguirre is one of their landmark collaborations.