Now that's a bummer! Although it was a typo error, DP fans were the first ones to react!

Shah Rukh Khan, Salman Khan, Akshay Kumar, Deepika Padukone and Amitabh Bachchan made us proud as they entered the top 20 list of Forbes' Highest Paid actors and actresses. Of course, DP entered the top 10 in the list where she was position on number 10, while the other top 10 included celebs like Melissa McCarthy, Amy Adams, Jennifer Lawrence a lot of others. Salman too managed to catch a 14th spot in the top 20 while SRK and Akshay entered the top 10 highest paid actors on the list. Now while the reputed business mag carried forward this news, they seemed to have done a small rookie error that definitely didn't go down well with fans! Also Read - From Janhvi Kapoor to Deepika Padukone: 5 Bollywood actresses unleash their inner Barbie in these tulle gowns

In the list, they misspelled Deepika Padukone and Salman Khan's names as Peedika Padukone and Salman Kahn. This was carried by several big media houses. Now it clearly is a typo error and these kind of mistakes happen a lot. However, fans are not the ones who'll take this reasoning as Miss Padukone's fan brigade soon started trolling the media by calling it 'Poorbus' and stuff like that. Being the highest earning actress in Bollywood and making a nice cut and entering the top 10 highest paid worldwide as well, it was quite a surprise to many fans that the name was printed wrong. So far Bhai fans haven't reacted to this but DP fans are not the kind to keep mum. Tweet after tweet started flooding as they involved Priyanka Chopra in this comedy of errors! Also Read - Project K: Prabhas welcomes 'Guru of Indian Cinema' Amitabh Bachchan as Nag Ashwin's sci-fi thriller goes on floors – view pic

In Hollywood DP is known as "Mystery date" and "Peedika Padukone" pic.twitter.com/6Yx3kGFxLn

We all gotta admit that we did expect Priyanka Chopra to take a position in this list considering her achievements in the recent past. Well, you can only imagine what happened when Priyanka and Deepika fans got a hint of this error! The PeeCee fans started trolling Deepika's PR team and even Forbes for the same. It is very well known that the XXX: The Return of Xander Cage actress' fanclub is damn active. Hence started a lot of trolling and celeb bashing. You can see from the tweets attached above that they were pretty damn mad about this blunder. 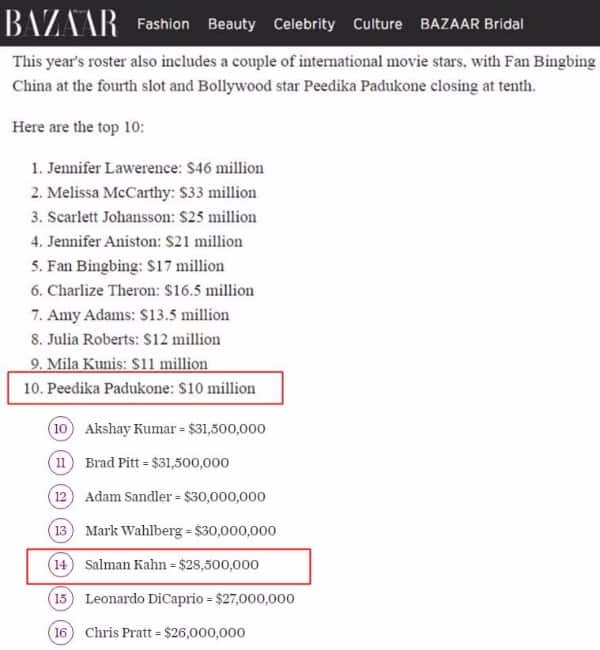 This isn't the first time a publication has been under fire coz of Deepika. Remember not so long ago when Deepika accompanied tennis star Novak Djokovic she was referred to as a 'female companion' by a UK tabloid and Ms Padukone fans were so offended that they even managed to extract and apology and corrected post from the publication. This time too was no different and this episode just proves that the actress fans don't take things lightly, not as far as their queen is concerned.

Relax guys! It was a rookie mistake and can happen to anyone. What are your thoughts on this, BollywoodLifers? Tell us in the comments section below! And stay tuned to this space for more gossips and latest updates!