From secretly attending her birthday to following her on Instagram, Janhvi Kapoor is bonding big time with Sara Ali Khan

Janhvi Kapoor and Sara Ali Khan are the newest BFFs?

Sara Ali Khan recently celebrated her birthday with a gluten, sugar and dairy free cake looking as beautiful as she always does. Later that night, Anu Jani and Sandeep Khosla threw a birthday bash for the young actress where the lady turned up looking so pretty in a desi avatar that we couldn't take our eyes off her. On her birthday, fans of the actress, who is yet to debut in Bollywood, started trending a demand of having her on social media. Guess to fulfill their wishes, Sara joined Instagram. But that's not what we are trying to say here. What the media couldn't catch at Sara's birthday bash was Janhvi Kapoor. Yes, according to a report in Mumbai Mirror, the Dhadak actress did make it to the party with Ishaan Khatter but for some reason, paps couldn't get their pictures. She came in early and left early as well. Guess paps reached the venue to late to catch up with her. (Also read: Sara Ali Khan is a competition for Janhvi Kapoor? Well, the Dhadak actress doesn't think so) Also Read - Janhvi Kapoor or Shanaya Kapoor – who looks HOTTER in the bikini? – Vote now

That's not all, Janhvi has started following Sara Ali Khan on Instagram. The Kedarnath actress joined the photo-sharing app very recently with just one post on it. Weirdly, the post makes no sense. It's a video that doesn't play. Is it something that we are not getting here? Anyway, you check out the pictures here... Also Read - Dostana 2 actress Janhvi Kapoor’s bold and iridescent swimsuit will set your hearts on fire – view pics 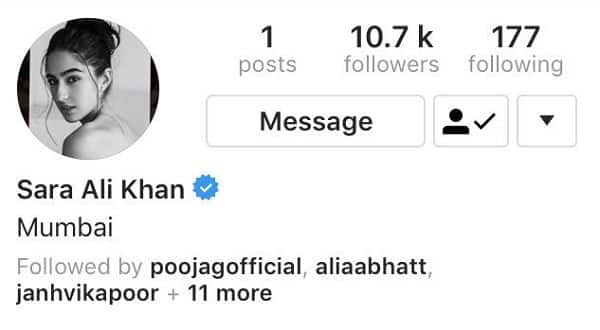 In a chat with Bollywoodlife, Janhvi Kapoor seemed as kicked about Sara's debut as we are. She said, "I know as an audience I am very excited to see her. I think she is beautiful and full of life. She has given me so much support and love after watching Dhadak. I think the competition between two girls is more media induced.” Well, anyone who said these two young actresses are not friends, really need to take a hike.