"Geez!" Priyanka Chopra's mom's reaction to Nick Jonas sweating it out is so us!

Earlier, Madhu Chopra had really nice things to say about her damad and now this!

Priyanka Chopra and Nick Jonas' Instagram PDA is our current favourite obsession. The lovebirds who recently took the world by storm with their whirlwind romance, followed by their international roka in desi style, are living it up and we're here for it. Be it sending each other a slew of kisses and hearts or pulling the long-distance relationship thing, our desi girl and her home boy are handing out relationship goals, to be very honest. In fact, PeeCee is off for a Mexican vacay with her boo and no points for guessing, we're gushing. Also Read: [All Pics] We want someone who can make us smile like Nick Jonas does for Priyanka Chopra! Also Read - MEGA-ANNOUNCEMENT! Inside Edge season 3 to premiere soon – more deets about the Vivek Oberoi, Richa Chaddha, Akshay Oberoi web series inside

But hey, seems like the entire fam is thick as they come. Let us rephrase that- not just Priyanka and Nick even their folks are indulging in the gram and expressing their love for each other. Rememeber when Mama Jonas thanked Priyanka's mom for being patient with and her dancing'? Well it turns out, not just 'Munde di ma' but even Kudi di ma is no less a fan. That's right. If you haven't noticed already, Madhu Chopra left a dope comment on Nick Jonas' post and we're floored. See for yourself; this what he shared... Also Read - International Yoga Day 2021: Sara Ali Khan's zen-mode pose will make you want to get cracking on those yoga asanas ASAP 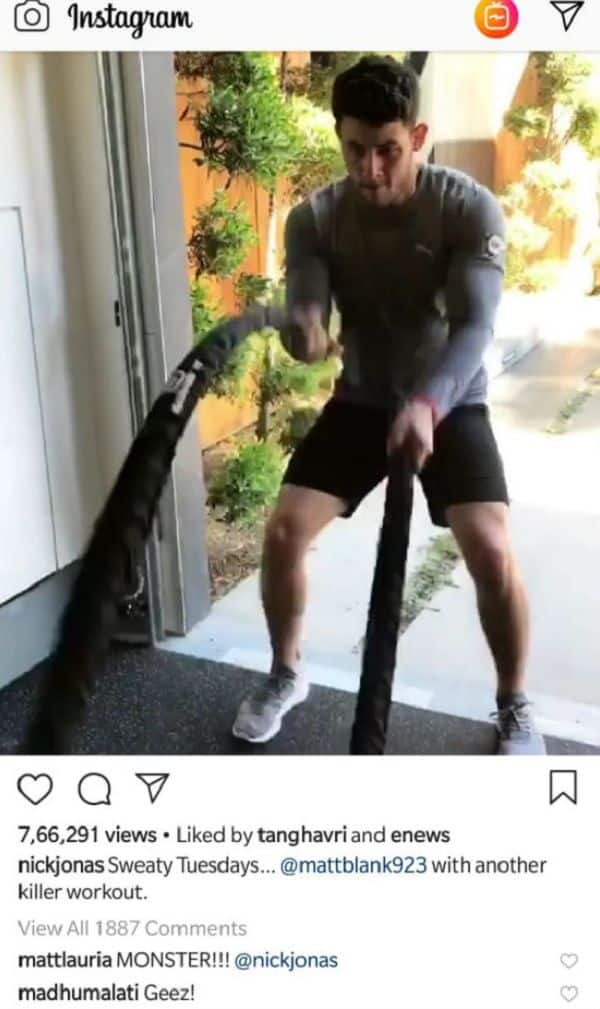 Gotta say, it was exactly our reaction when we saw him sweating it out like that. Priyanka and Nick celebrated their engagement with a party on the evening of their roka ceremony on August 18. Soon after the festivities, Nick and his family returned to the US while Priyanka, who extended her stay in Mumbai, flew out of India only recently. Earlier, Madhu Chopra had really nice things to say about her damad. She had said, "It was a new thing for him (Nick Jonas) and he took it seriously. He followed what our panditji said, and chanted the Sanskrit mantras accurately. Both he and his parents did it beautifully. They are nice people."