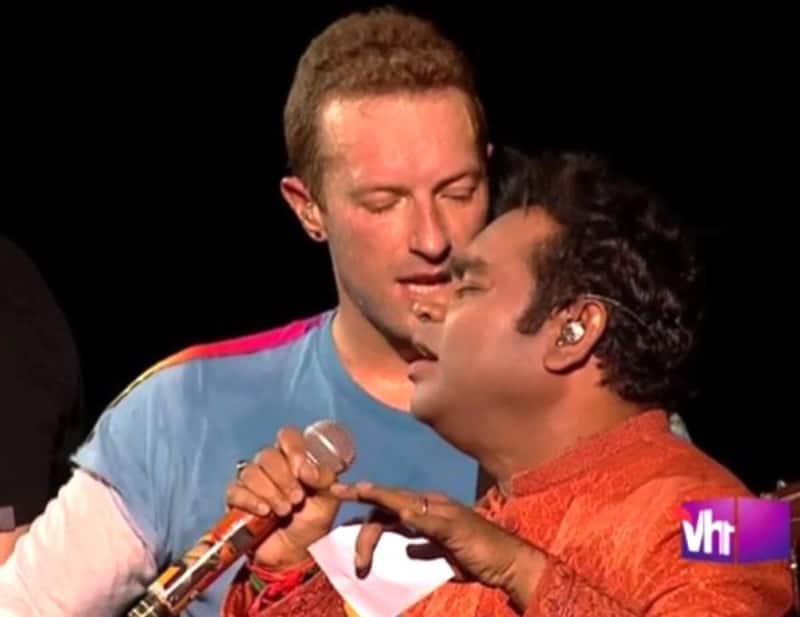 The Global Citizen Festival 2016 kicked off just now and we have to say that we are looking forward to this evening. The show was one of the most awaited event of the year and after standing in a queue for hours in the sweltering heat, nearly 80000 guests have been let in to begin what will be the most epic concerts ever. Not only are we going to see Bollywood celebs like Ranveer Singh, Katrina Kaif, Shraddha Kapoor, Farhan Akhtar and Sonakshi Sinha perform, but we will see International artistes rock the stage too. British bands Coldplay and The Vamps will be seen performing their biggest hits. We will see Demi Lovato and Jay Z take to the stage too. Also Read - Ranveer Singh-Deepika Padukone, Aishwarya Rai Bachchan-Abhishek; when distasteful separation rumours of Bollywood's loved couples grabbed eyeballs

For the uninitiated the Global Citizen Festival 2016 is a concert in association with the international NGO - Global Citizen which is trying to raise awareness about poverty, education, sanitation and much more. Anyway, the show has started and here is what has happened till now: Also Read - Brahmastra: Mouni Roy recalls shooting 6-7 days with Shah Rukh Khan; calls it 'an out-of-body experience'

# Coldplay gave a vote of thanks, took a bow and left, bringing the Global Citizen India festival 2016 to a close... Also Read - Alia Bhatt in Heart of Stone to Deepika Padukone in Pathaan: Bollywood heroines who will kick some b*tt in upcoming new action movies

# Chris brought the show to close with Ae Dil Hai Mushkil's Channa Mereya and A Sky Full of Star...

# Chris Martin calls upon A R Rahman. The Oscar winner composer comes on stage and recites Vande Mataram as Chris plays the guitar. The crowd joins in and sings along, bringing a perfect end to his set!

# Coldplay is here FINALLY! After an extraordinary welcome, Chris Martin and his band enter the stage to an electrifying response. The instantly set the stage on fire with their spectacular performance. They start with A Head Full Of Dreams. They follow it up with Yellow. Chris then says Namastey to the whole crowd, talks in a bit of Hindi and tells everyone to make some noise. And when Chris performed Paradise, it gave everyone goosebumps. The band followed this up with Magic and we have to say we were mesmerised...

# Shah Rukh then calls upon Sachin Tendulkar. They have a fun banter, after which they call Coldplay on stage.

# Shah Rukh Khan welcomes Frieda Pinto on stage where they discuss about the goals of the initiative.

# Devendra Fadnavis then introduces Indian Prime Minister Narendra Modi, who speaks to the crowd via video conference. He gives an inspiring speech where he spoke about discusses the impact of youth on public policy. He also mentioned how convinced he is about building a Swachh Bharat, free of all forms of filth within one generation.

# Sachin Tendulkar, Ratan Tata and Maharashtra CM Devendra Fadnavis take the stage and talk about how important this new initiative by Global Citizen India is. They also motivate the youngsters to take up these social issues and make India a better place.

# Ranveer Singh came on the stage and gave an ELECTRIFYING performance. He danced to Ude Dil Befikre and Nashe Di Chadh Gayi Hain­ from Befikre. Post that, he also shaked his leg to Malhari from Bajirao Mastani. Cool na?

[LIVE VIDEO] A glimpse of Ranveer Singh's electrifying performance and the madness after #GlobalCitizenIndia pic.twitter.com/3SqYu3NbEl

# Shah Rukh Khan appears and introduces the next performer - Jay Z. The crowd is excited, but they are shocked when the singer raps to Shah Rukh Khan's Chaiiya Chaiiya. Jay Z then raps to Mundiya toh bach ke rahi and then sings four to five of his famous numbers.

# British band - The Vamps came on the stage and rocked it completely. They sang three to four of their hit numbers, including Wake Up and the crowd started dancing once again.

# A R Rahman made us nostalgic as he sang quite a few songs from the 90s and early 2000s. The crowd stood up as he sand Humma Humma...

# The stunning Shah Rukh Khan came on stage and requested everyone to take up social causes. He was going to introduce A R Rahman next, but it was the actor who stole the show. He sang a few of A R Rahman's compositions and the crowd were left amazed.

Video: @iamsrk has a unique way of calling #ARRahman on stage at the #globalcitizen India 2016

# Vidya Balan comes on stage to talk about water and sanitation issues. The crowd cheer for her as she talks about the issues and gives people an important solution.

.@vidya_balan comes on stage to talk about Water and Sanitation at #GlobalCitizenIndia

"The fact is 44% of India doesn't have access to safe water! These basic rights are distant dreams for them." -@vidya_balan

"The Government has been working tirelessly to make sure that everyone gets access to Water & Sanitation."- @vidya_balan #GlobalCitizenIndia pic.twitter.com/JDvwo0PvyH

# Farhan Akhtar takes to the stage and performs on a few songs from Rock On and Rock On 2. He even crooned Atrangi Yaari along with Amitabh Bachchan. 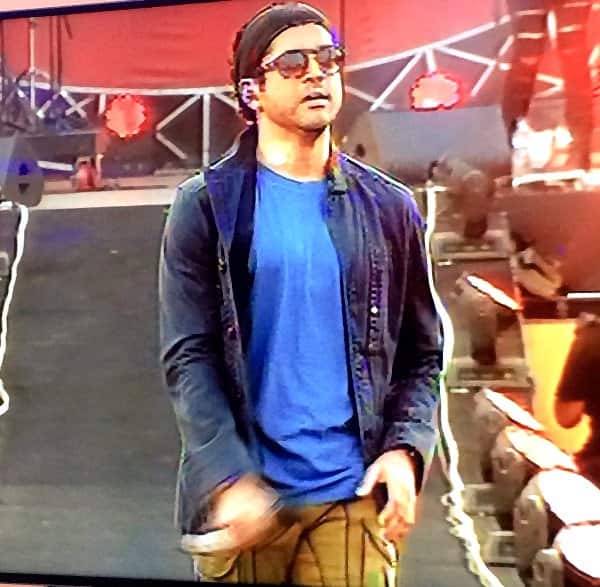 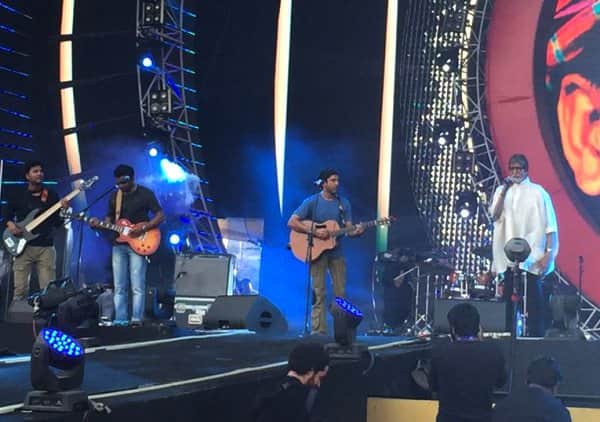 # Sonam Kapoor talks about the gender inequality in India and asks everyone to pledge support to the cause. 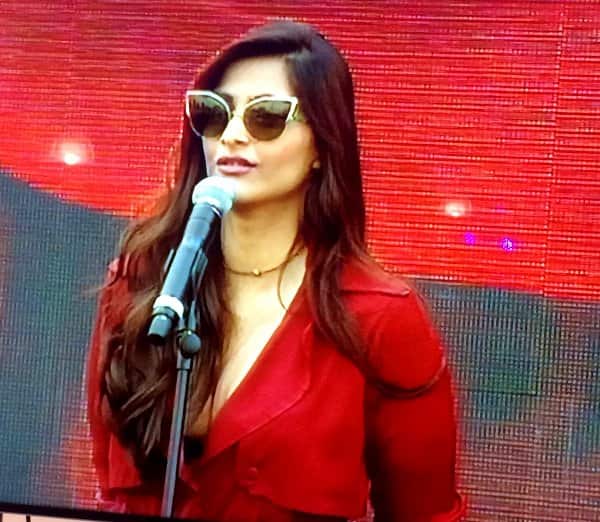 # Karan Johar comes on the stage and speaks about Global Citizen India's initiatives. He pledged to help fight poverty that has crippled the nation. 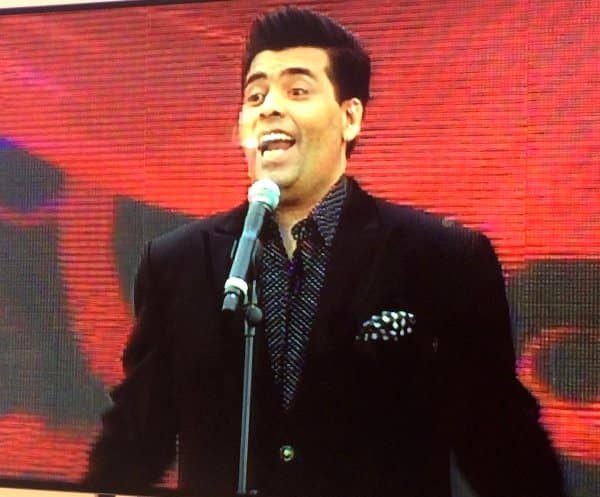 # Amitabh Bachchan recites a very touching poem as the crowd rises. He is joined on stage by Shillong Choir (the winner of India's Got Talent) and they sing together.

# Arjun Kapoor welcomes Amitabh Bachchan on to the stage.

# Benny Dayal performs in front of the crowd with his band.

# Demi Lovato leaves the crowd spellbound with her stunning performance. She performs for nearly 20 minutes, covering most of her hit numbers...

# Alia Bhatt welcomes Demi Lovato on to the stage!

@aliaa08 welcomes @ddlovato to the #GlobalCitizenIndia STAGE!! Put your hands together!!!

# Riteish Deshmukh and Malaika Arora Khan spoke to the crowd. They had a funny banter with the people, where they spoke about a few key issues that are crippling the country too.

# Shraddha Kapoor was called on stage and she gave an electric performance. She sang Teri Galiyaan and Udjaa Re, leaving the crowd mesmerised.

# Maharashtra CM Devendra Fadnavis addressed the crowd gathered at the venue and spoke about how this initiative will help India and the world.

#Shankar Ehsaan Loy took the stage next and they sang quite a few of their popular numbers. The trio even made the crowd sing har ghadi badal rahi hai along with them. Cool na?

# Monali Thakur was called upon the stage and she made the crowd spellbound with her fabulous voice. Iktaara was our favourite from the few songs she sung on the stage.

# Yes, Sonakshi came on stage and spoke about how youngsters could change the world. She then sung a few songs, including Ishqaholic, before leaving the stage.

# Parineeti Chopra and Arjun Kapoor came on stage and started the Global Citizen Festival 2016. The stylish pair appeared on the stage, welcomed everyone, spoke about what the night is going to be about. They then introduced the next celeb - Sonakshi Sinha.

# Arijit Singh kickstarted the show as he sung a few of his songs including the Ae Dil Hai Mushkil title track. The crowd was mesmerized by his voice. Arijit even took a guitar and started playing it during his performance. We have to say, he was the perfect guy to start off the show.

Stay tuned right here as we get to you all the LIVE updates from the Global Citizen Festival 2016? What do you guys have to say about the show till now? Tell us about your thoughts in the comments section below!