Govinda and Varun Sharma have collaborated for Fry Day, which was all set to hit the theatres with Alia Bhatt and Vicky Kaushal's Raazi. However, makers of the former decided to postpone the release of their film to avert a clash with Raazi. The new poster of Fry Day has been released today and it mentions the new release date, which is May 25, 2018. Talking about the poster, it's as quirky as the first one. The latest one has Govinda holding a water purifier, which has Varun's name photoshopped on it. Also Read - Brahmastra actress Mouni Roy grooves to Jalebi Baby; looks smoking hot in a LBD worth Rs 27K – watch viral video 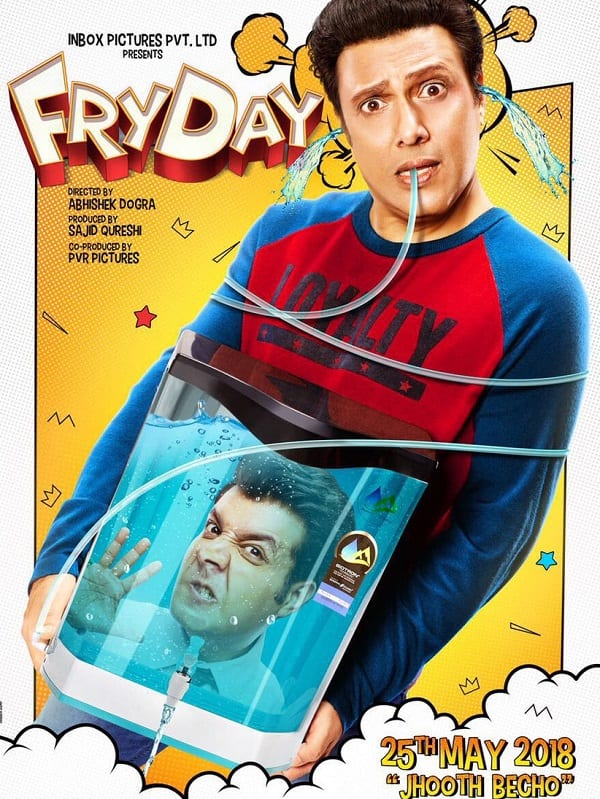 The tagline of the film reads – Jhoot Becho, which means the film could be about con and deceit. Fry Day is an out-and-out comedy – a genre which both Govinda and Varun are masters of. So needless to say, we are very eager to watch the trailer, which should be out real soon. Talking about working with Govinda, Varun told Hindustan Times, “It is so much fun shooting with him. There’s a lot of learning, since he is a legend of the genre in which I am trying to make a mark.” He also talked about his first encounter with Govinda as he said, “The first time I met him was to break the ice before we began to shoot. He was very sweet and welcoming and we started chatting. I confessed to him that I’m a big admirer of him, and that I have been seeing his songs since I was a kid. That excited kid came out in front of him!.” ALSO READ: Raazi song Ae Watan: Arijit Singh’s number for Alia Bhatt-Vicky Kaushal’s film will give you goosebumps – watch video

As for Raazi, this one has been directed by Meghna Gulzar, who last directed Talwar. The trailer of the film, which was out few weeks back managed to impress a huge set of people. And needless to say, those people are eagerly waiting for the film to release on May 11. So it only made sense for the makers of Fry Day to change their release date.