Adele dedicates her Best Album of the Year Grammy to Beyonce! Leaves the pregnant pop star in tears. Check out the video. 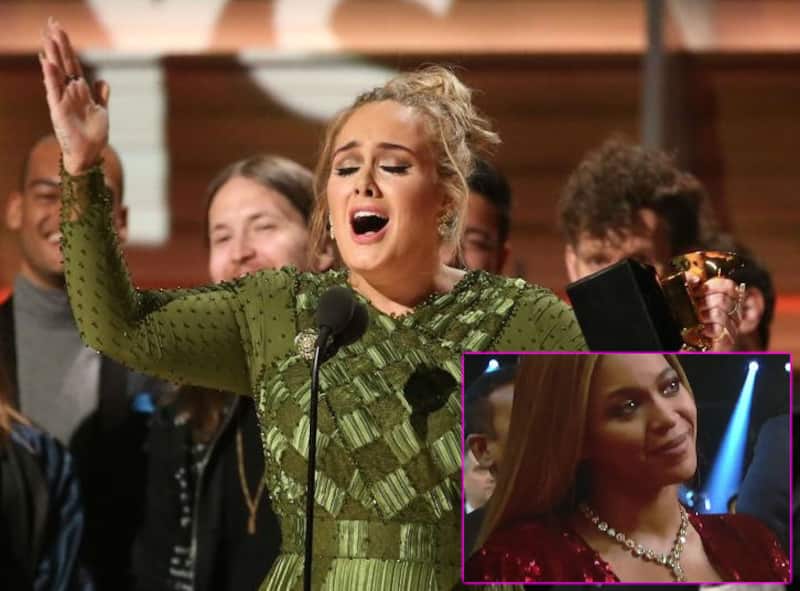 It was a very crucial competition between Adele and Beyonce to take home the coveted Album of the Year trophy at Grammys this year. With an equal amount of hits delivered from both the singers, the award was finally given to Adele, who attributed her big win to Beyonce! The 28-year-old singer was in tears as she accepted her award but couldn't stop gushing about how she thinks Bey totally deserved it. Right after Adele said, “I’ve always loved you and I always will,” Beyonce was left in tears. The pregnant popstar was overwhelmed by the love she was receiving from her contemporary and started weeping. Oh, it was such an emotional moment not just for Adele and Bey but even for the audience. As we sat with bated breath to see who would finally take home the Album of the Year trophy, the whole euphoria of Adele winning turned into an emotional episode. Also Read - Beyonce rides a horse exposing her breasts; covers one of them with just her hand [View ULTRA-BOLD Pics]

Adele literally ruled this year as she took home Song of the Year for Hello, Pop Vocal Album for 25 and Pop Solo Performance again or Hello. On the other hand, even Beyonce bagged a lot of accolades starting from Best Contemporary Pop Album and Best Video. Apart from the awards, the duo even delivered spectacular performances. Adele gave a tribute to late pop artiste George Michael by singing FastLove. Although she started her performance on a good note, she soon stopped midway to give a much better tribute that Michael deserves. And boy was that a good one! It brought tears to everyone's eyes. (ALSO READ - Grammys 2017: Adele messes up her tribute to George Michael but here’s how she makes up for it – watch video) Also Read - BTS: J-Hope's More tops Spotify's Global Top Songs Chart; Grammys puts his name along with Beyonce-Lizzo as artistes of the month

#Adele takes home "Album Of The Year" at the #GRAMMYs and brings #Beyonce to tears with her speech! pic.twitter.com/hYg1bRLBov

While Adele's tribute touched everyone's heart, Beyonce's performance floored everyone! Queen Bey literally dressed as a royal diva, with a sheer golden gown and a headgear. With that, she kickstarted her performance while flaunting her baby bump. Bey grooved to Sandcastles and Love Drought that was way too awesome for anyone to reach! There is a reason why she is called Queen and she most certainly proved it yet again! Even daughter Blue Ivy carter was swaying to the tunes of her mother as she and Jay Z flashed their smiles. It was a stellar performance. (ALSO READ - Grammys 2017: Queen Bey SLAYS it with her spectacular performance – watch video) Also Read - Trending Hollywood News Today: BTS' Jungkook's Namaste gesture at White House viral, Kim Kardashian-Kanye West meet up and more

Have you checked out what happened at Grammys 2017 yet? Don't wait up. Quickly go through our site and you'll find all the hot scoop from the award function right away!