Grammy Awards 2016: Adele's magical performance on All I Ask is a TREAT to the ears - watch video!

Adele performed live after four years and she performed on the song, All I Ask for which was beautiful!

You'll be blown away for sure! Read on...

Singer and songwriter Adele is a sensation! Her songs are so addictive that sometimes even after hearing it for the entire day, you wouldn't be satiated by it! Now you may think it's a lot of flattery in one sentence but her voice is so WOW! You can never get enough of this lady's mesmerizing voice. In fact, everytime she releases an album, we can't help but keep humming the tunes of the songs and sometimes even sway a little bit while we sing. But for about four years now, Adele didn't make a starry appearance on the Grammy stage to perform for the audience. Yes. Our ears craved for the lady's voice on stage but the diva made us wait for literally four years before she accepted to sing for her fans. Also Read - Has Adele shaved her hair off for her next album? — view pic

And what a treat! Her melodious self just reminded each and everyone of that one special person and needless to say, put everyone on a nostalgia trip. Although initially there were a few technical glitches and sometimes her voice did falter a bit but that could easily be ignored because of the magnificent performance that she showered on her fans and the audience. In fact, after the performance was over, she got a standing ovation from the crowd! Despite having the smashing hit song, Hello in her kitty, the singer resorted to the ballad, All I Ask. With just the music of the piano and Adele's voice, the Grammy night became more amazing. Also Read - Singer Adele files for a divorce from Simon Konecki five months after parting ways 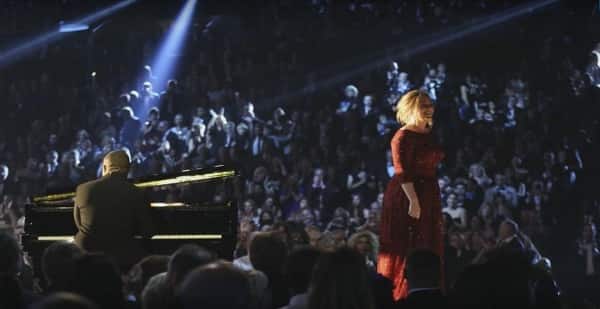 The performance was literally magical so do not miss out this video of it! Also, after watching the video, tell us what you thought of Adele's performance and if it was worth the four year long wait in the comments section below!