Lady Gaga paid a tribute to legendary artist David Bowie at Grammy Awards 2016! Check out the video of the same here.

Gaga sure likes challenges but did she win this one? Read on...

How can we forget that fateful day when legendary artist, David Bowie passed away after a long battle with cancer. Yes. It was a day to mourn as the Daddy of Pop was no more. One month later, the void is still felt by all fans as no one can come close to Bowie's magic! However, Lady Gaga, who derived inspiration from the late artist, from the start of her career, always resorted to doing some out of the world, atrociously weird sh*t (something we loved Bowie for) but with class and swag! A lot of times, she did mention that Bowie, Mick Jagger were all the artists who inspired her and made her what she is today. So a month after the Space Oddity singer's death, the pop diva took to the Grammy stage to tribute the late singer. Also Read - Was Lady Gaga's appearance at the Grammy Awards influenced by Jennifer Lawrence's Mystique avatar in X-Men?

So in a gist I'll tell you the exact things about Bowie that she incorporated in the appearance. The orange hair alone was a win-win as not only was it so wow Bowie but also had a lot of Gaga in it. Then obviously her costume as she performed on the stage was very Bowie inspired. The digital make up and the tattoo and everything was phenomenally working out for the diva but here's the glitch. Also Read - Lady Gaga to honour music legend David Bowie at the 58th Annual Grammy Awards! 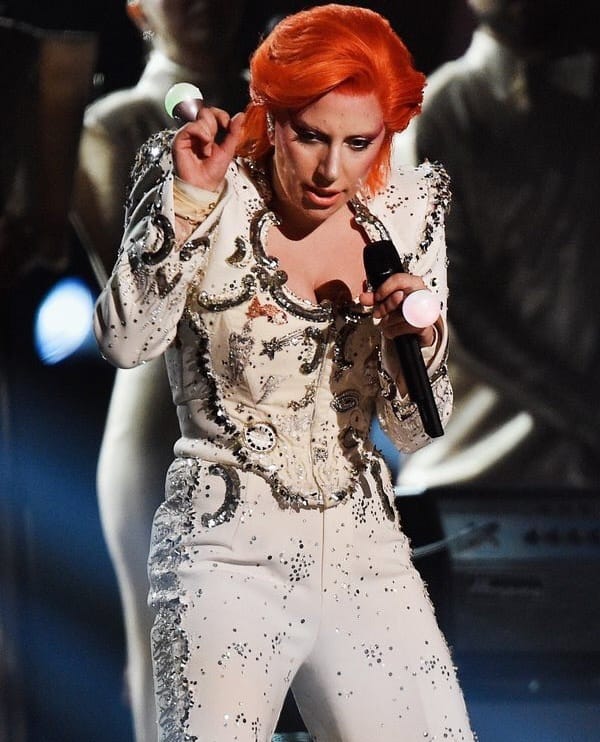 She started off with Space Oddity (my favourite!) and really caught my fancy but as she moved on, the act seemed too dragged. The initial few minutes were simply awesome but with a view to not miss out his best songs, Gaga put in all the best songs in her performance which without a doubt made the act too stretched and it looked like even the energy of Gaga was draining. I simply couldn't feel the songs after a while as it became rather chaotic and BORING.

If she wouldn't have taken in too many songs, maybe the act would've been more interesting and she could've justified her tribute better. She sang Space Oddity, Changes, Ziggy Stardust, Suffragette City, Rebel Rebel, Fashion, Fame, Under Pressure, Let's Dance and ended it with Heroes! It didn't really put me through a nostalgia trip but you check out the video attached below and tell us what you think of it in the comments section below!