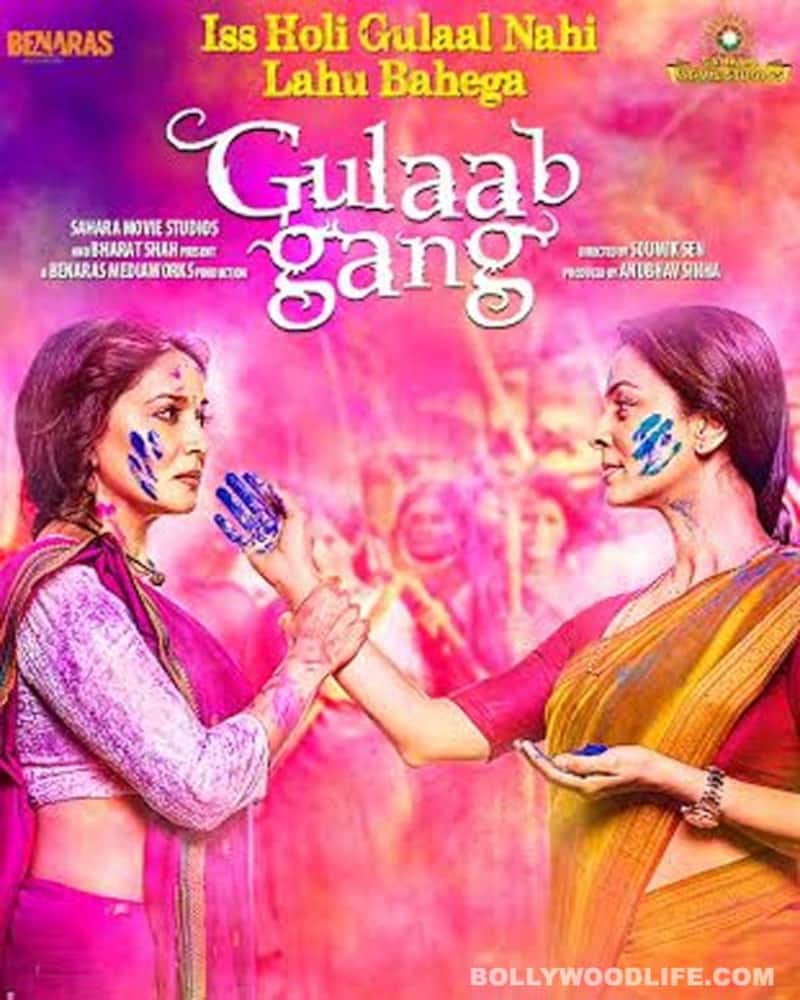 Bollywood's quench of having a full length folk album is finally over in the form of Gulaab Gang, and the added classical touch is the cherry on the cake. The singers are fab, the lyrics are apt and the compositions are traditional. What more do you need for a perfect laid-back evening in the countryside! Let us have a look at each track singularly… Also Read - Jhalak Dikhhla Jaa 10: Are judges Nora Fatehi, Madhuri Dixit, Karan Johar biased? View Audience Poll

Sung by Malabika Brahma and Shilpa Rao, the song is powerful and full of energy. The tone of this rendition is rustic and it is the singers that pump up the energy quotient in you as a listener. Neha Saraf’s lyrics fit easily into the theme of the film and the composition by Soumik Sen gives you a feel of what to expect in the film. The tune of Gan gan ga gan gives you a very upbeat and rhythmic anthem. If you loved Dhoom:3’s Bande hai hum uske song, which had similar patriotic beats, you would definitely love this too. Also Read - Jhalak Dikhhla Jaa season 10: Here's a look at Rubina Dilaik, Paras Kalnawat, Nia Sharma's dancing partners

Sung by Kaushiki Chakroborty and Malabika Brahma, this song is a perfect jugalbandi of classical and folk. Soumik Sen’s composition gives you the feel of a street play and a duel going on between the singers. The lyrics are apt but it is the musical duel that would keep you captivated till the end. If you are a lover of any form of Indian music, you would definitely want to keep this one in your music player for a long time.

Sung by Malabika Brahma and Pavni Pandey, this song seems to be just another folk song. Soumik Sen’s composition gives this folk song some beats and some classical touches but it is not as good as Dheemi dheemi si. The lyrics by Shreya Narayan are also plain and had nothing new to offer. You can easily pass on this one unless you are a great lover of folk music.

Sung by Kaushiki Chakraborty, this song is the slowest possible track ever. The track is inevitably very beautiful and has ample opportunity for every instrument player to showcase their talent, especially the flute player. It is like listening to a bada khayal in a movie, which is very good, but never actually feels like it started.

Sung by Kaushiki Chakraborty, this is another folk lore which has been given a bit of contemporary beats by Soumik Sen. The lyrics fantastically showcase this song to be a perfect Holi song. But before you add it to your Holi playlist let me give you a warning: This is more on the lines of Rang barse from Silsila and if you are looking for a Balam Pichkari from Yeh Jawani Hai Deewani, then you are sadly mistaken. The movie releases around Holi and thus having this song makes sense.

Sung by Madhuri Dixit Nene, her mom Snehalatha Dixit and Anupama Raag, this traditional folk song seems to be an extra added number to the album. The song has strong background presence of a shehnai and makes you feel like a wedding song. Listen to this track not to find flaws in Madhuri Dixit Nene and her mom’s voice, but for the effort that the two put in the song. Anupama Raag definitely gives the classical touches to the song when it starts dragging a bit.

Sung, composed, and written by Soumik Sen this is a tribute to women. It is a praise for women and what all they have done to better the world. Surprisingly this one does not have the feel of folk tunes and is quite contemporary. It would definitely lift your spirits and make you want to call your mothers, sisters, wives, girlfriends, etc and thank them for all the good things they have done for you. Although a bit on the slow side, this track should be there in every girl’s playlist to boost their morale and should be there in every guy’s playlist to remember how important the opposite sex is to the society.

Verdict: If you are into listening folk songs you would definitely love this album. The added touches of classical notes to the traditional tunes are good at some places but at other places it feels like 'just the last song'. The folk and the classical singers both have done a fabulous job. Our pick of the album are Gulaabi, Dheemi dheemi si and Teri jai ho.