Hacked or not? Kapil Sharma abuses, apologises...only to refute it all

Kapil Sharma sent the Internet in a tizzy after posting a series of abusive tweets against the media. It seems the comedian was upset about the Salman Khan verdict and the negative stories floating around the superstar. He also lashed out against the malaise of fake news, which is a major point of debate in the media. Well, in a series of tweets, Kapil lashed out against the media in a huge manner. Later, a tweet was posted about how it was hacked and apologised for the series of offensive tweets from it. Now, he wrote that his account wasn't hacked and instantly deleted the tweet. While the comedian's comeback show Family Time with Kapil Sharma has made it in the top 10, a series of negative reports around the show have been floating around. The comedian today lashed out against some reporters and his language to put it mildly, was rather foul. Right from rumours of unprofessionalism to alcoholism, the comedian has been dealing with a lot of issues.

Fans can't decide if Kapil Sharma was drunk tweeting or his account was hacked! 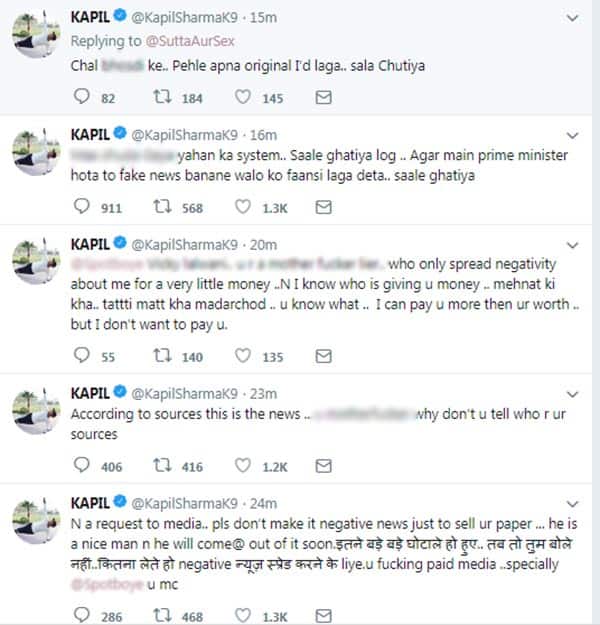 Also Read - Is Kapil Sharma making a comeback on TV in October?

Also Read - Kapil Sharma hires a personal trainer to get back in shape - comeback on the cards?

Today, there was news that the account of the Ministry of Defence got hacked and incidentally, this has happened with Kapil's account. The comedian has confessed that he is has battled depression issues and alcohol problems. Incidentally, this Twitter incident is happening a day after Sunil Grover and Shilpa Shinde launched their new show, Dhan Dhana Dhan. Fans are aghast seeing Kapil's language and some are wondering if it is indeed the superstar comedian who is tweeting all this. Only Kapil can answer this? Stay tuned to BL for more scoop and updates...