Hardik Pandya and Urvashi Rautela's inside pic from a party goes viral amidst link up rumours!

And just when everyone was almost convinced to believe Hardik Pandya and Elli Avram are in a relationship, here comes a twist in the story. Hardik is now being linked to Urvashi Rautela and it's all thanks to this recent party that they attended together. While it's okay to chill together. An online portal carried this inside scoop saying how Hardik and Urvashi only had their "eyes and ears for each other" and that they exchanged "flirtatious looks" at the party. In fact, some even suggest how despite Hardik being accompanied by his brother Krunal, Urvashi hit it off with Hardik more and spent quality time chit-chatting! Also Read - Trending Entertainment News Today: Remo D'Souza's brother-in-law found dead; Urvashi Rautela trolls Rishabh Pant's fan and more

Now, a picture of Urvashi posing with Hardik and his brother Krunal are doing the rounds the internet, proving how she actually hung out with the Pandya brothers. But it would be wrong to conclude that there's more to what meets the eye through this picture. Or what if there is? Your guess is as good as ours. Also read: Hardik Pandya is dating Urvashi Rautela, and NOT Elli AvrRam? Also Read - Urvashi Rautela trolls Rishabh Pant's fan; netizens call it 'EPIC' 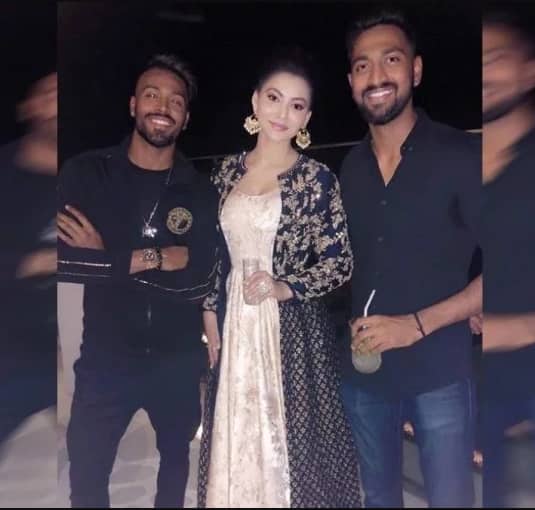 Meanwhile, Elli has been spotted with Hardik at more occasions than one; though she tries her best to hide her face and run for cover. In fact, even in an interview, she refused to confirm her relationship status with Hardik saying, "Let them [people] be curious in life. Why do I need to clarify anything? By talking about these rumours, I’d just be giving more fodder for gossip [material]. Anyway, so many wrong things have been written over the years but I’ve never gone out and clarified [them]. Once you become a known face, people will follow you for gossip and news. But, we are not going to lock ourselves up. So, you can’t do much to stop these rumours. People have such strong mentality that no matter what I say [about Hardik], they will be like, ‘Oh, she is lying. We know the truth. She is hiding something."