Our trade expert Amul Vikas Mohan analyses if Rangoon's failure at the box office will affect Saif Ali Khan's career or not...

Saif Ali Khan's Rangoon has released, however, it has not been able to set the cash registers ringing. The movie managed to earn only Rs 18.07 crore over its first weekend, giving the movie a disastrous start to say the least. Since then, the film has not picked up and over the first week, it managed to rake in only Rs 21.47 crore. The trade had decent expectations from the film, but looks like Rangoon could not live up to the hype. Obviously not only will this affect the makers but also the actor too. Also Read - Milind Soman’s wife Ankita Konwar gives this WITTY reply to a fan asking her about family planning

In fact, even after such a stellar act, Saif Ali Khan finds himself in a precarious situation after Rangoon's debacle. With three back-to-back box office duds (Happy Ending, Phantom and now Rangoon), looks like lady luck hasn't been kind to Saif Ali Khan. None of his recent films have made profit. So does this mean that his career in the danger zone after Rangoon's debacle? Or will his upcoming films - the Chef remake and Kala Kandi help him establish himself as a money spinner once again? We called up our trade expert, Amul Vikas Mohan (Editor of Super Cinema) and this is what he had to say... Also Read - Saif Ali Khan: Filmmakers and audiences still consider me a bankable actor

Talking about Saif's last few releases and their run at the box office, Amul mentions, "Saif Ali Khan hasn't done too many films in the recent past. His last five films were Bullett Raja, Humshakals, Happy Ending, Phantom and Rangoon. You can very well see where he is standing right now, as none of these films got the box office ringing at any point, barring Humshakals, which people think is a flop. But it is his highest grossing film in his last five releases, and that tells a lot." ALSO READ - FINALLY! Saif Ali Khan is making his Instagram debut and we can't wait to see if he'll share Taimur's photos Also Read - Saif Ali Khan on Chef's failure: These days people don’t want to spend money on marketing, they send the actors to Bigg Boss 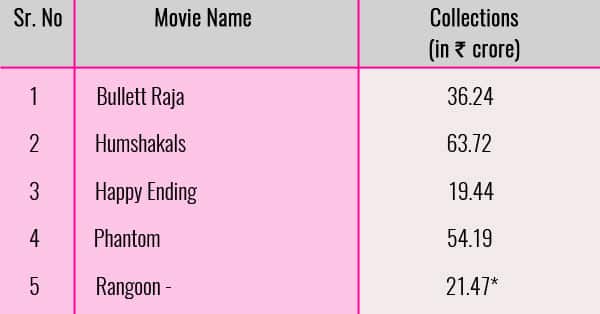 Obviously Saif's career has been affected, but can the Chef remake and Kala Kandi help Saif bounce back? Amul adds, "Without a doubt he is one of the finest actors in Bollywood. He also has a fan following and the Race franchise is proof of that. He is one of those actors who need a big hit to get them going again and that hit seems not too far away now. His immediate releases, Kala Kandi and Chef don't look very commercial to me on paper. But now-a-days, there is no small film and big film as such. Any movie can go out there and do great business, which might surprise you and shock you. That's the reality of box office and star pull at the box office. Given that factor, Saif really needs to reinvent himself." ALSO READ - Saif Ali Khan's Kalakaandi inspired by Hollywood film 50/50?

Anyway, have you seen Rangoon? If yes, share with us as to what you thought about Saif's part in the comments section below...