Recently, Sushmita Sen was clicked with her daughters and a little boy. So, netizens started speculating that the actress has adopted a baby boy.

Sushmita Sen has been in the news for multiple reasons. Last month, she was in the news for her amazing performance in Aarya season 2, later she grabbed everyone’s attention because of her breakup with boyfriend Rohman Shawl, and recently, the actress made it to the headlines for reportedly adopting a baby boy. Last night, Sushmita was clicked by the paparazzi. She was accompanied by her daughters, Renee and Alisah, and there was another woman with them who was carrying a little baby boy. Soon, everyone started speculating whether the actress has adopted a baby boy. Also Read - It’s AWKWARD! Pictures of Sushmita Sen, Rubina Dilaik, Janhvi Kapoor, Kartik Aaryan and others will start your Sunday on a funny note

Now, finally, Sushmita has opened up about it. In her Insta story, she shared a picture with the little boy and wrote, “Having a chat with my Godson Amadeus about the random news concerning him, going viral in the media…his expression says it all!!! Picture courtesy: Sreejaya (Amadeus’s mom).” Also Read - Sushmita Sen’s ex-boyfriend Rohman Shawl shares life lessons he learnt recently; says 'it hurts, it pains' 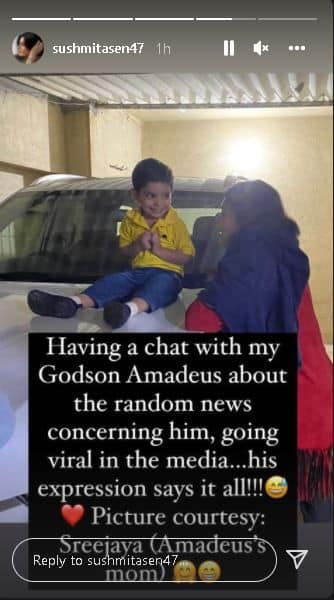 So, this clarifies that Sushmita has not adopted a baby boy. The actress adopted her first daughter Renee in 2000 and her second daughter in 2010.

While announcing her breakup with Rohman, the former Miss Universe had posted, “We began as friends, we remain friends!! The relationship was long over…the love remains!! #nomorespeculations #liveandletlive #cherishedmemories #gratitude #love #friendship I love you guys!!! #duggadugga.”

After her breakup with Rohman, Sushmita has been sharing a lot of self-love posts. Recently, the actress had shared, “I live by the water, I dance by the sea, of all the things I could be..I choose to be me #workinprogress #imagine #create #recreate #powerofself I love you guys!!! Quickly make a wish…triple 1 & triple 2…yup, the date today!!! #duggadugga #angels.”

On the work front, reportedly Sushmita will be seen in Aarya season 3. While talking to Mid-day about Aarya 3, the actress had earlier stated, “Penoza had five seasons. So, we have the basic arc of five seasons. Only Ram can answer this question, but I have a dirty feeling we’re coming with season three.”