Haseena first look: Shraddha Kapoor matches up to the real Haseena Parker in this intense poster

The first look of Shraddha Kapoor's Haseena is out and it is very promising! The film will release on July 14, 2017.

Shraddha Kapoor's Haseena is all set to release in July this year. For the first time she'll be shedding away her girl-next-door persona and take on such a serious role. Just sometime ago, the diva shared the first look of hers from the film and boy is it intense! From the poster itself you can tell what a massive transformation she has undergone to match up to the real Haseena Parker. For those unaware of the premise of the film, it is a biopic on the life of Dawood Ibrahim's sister Haseena, who took charge of the crime world after her husband was killed by the Arun Gawli gang, in Mumbai. How she became the godmother of all crimes and rose to become one of the most terrorising leader. After her husband's death, she became in charge of all of Dawood's business in the city. With the power that she hand in her hands, there was absolutely no one to stand up against here. She died in 2014 due to cardiac arrest. Also Read - Shraddha Kapoor REPLACES Sonakshi Sinha in Apoorv Lakhia's Haseena!

With such a strong history, surely it's going to be one tough a role for the actress. This is the first time she has an entire movie on her shoulders. Shraddha's brother, Sidhanth Kapoor will be essaying the role of Dawood Ibrahim in the film. For the need of authenticity, you'll see how the makers have tried to make the actress look a lot like Haseena and guess what, they've done quite a good job. The film is being directed by Apoorv Lakhia. You can scroll below and check out the look shared by Kapoor. (ALSO READ - Shraddha Kapoor's Haseena will find a tough competitor in Saif Ali Khan's Chef) Also Read - Salman Khan not part of Celebrity Cricket League? 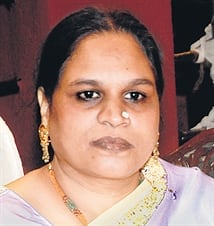 It's going to be a very interesting watch as not many are aware of Haseena Parker's story. While a lot of movies have been made on the underworld of Mumbai but none close to the life of Dawood's sister, who pretty much owned most of the people. Whatever she set her eyes on became hers without any trouble. Yep, that was the power of the Queen. Watching Shraddha play such a challenging and gritty role is going to be very interesting. As you can see, with the fierceness in her eyes and intense look, we can tell that perhaps this would change things for the stereotype that she has been carrying for quite a while. The film is slated to release on July 14, 2017. The shooting recently began and already a date so close has been finalised.

We've attached the image of the Haseena Parker so you can compare them. What are your thoughts of Shraddha as Haseena? Tell us in the comments section below. Stay tuned to this space for hot scoop and latest updates.