Heath Ledger had improvised the hospital explosion scene in The Dark Knight?

Well, legend has it that this scene was improvised by Heath. 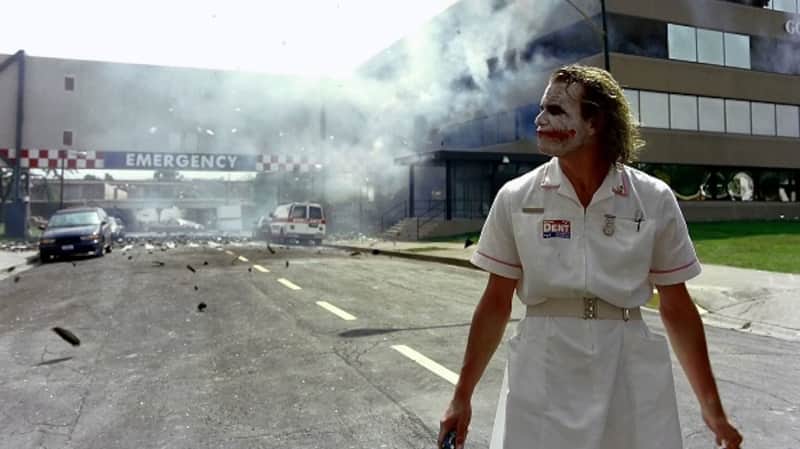 Late actor, Heath Ledger, is one of the most talented actors that the world has ever seen. He is one of the few actors, who would have taken up a role like the one in Brokeback Mountain. He immortalised the character of Joker in The Dark Knight. Today is his 38th birth anniversary. And as we remember the actor, we will discuss an anecdote that we think is very interesting. Also Read - Top Gun: Maverick - Tom Cruise starrer crushes the box office record of The Dark Knight; crosses USD 1 billion mark globally

In one of the most iconic scenes in Christopher Nolan's The Dark Knight, Heath's Joker dresses up as a nurse and visits a hospital. You know which scene we are talking about, right? Remember when Joker comes out of the hospital and fidgets with the bomb detonator as there is a delay in the big explosion after the smaller one? Here, take a look... Also Read - Ranveer Singh's swanky new vanity van worth Rs 80 lakh is inspired by The Dark Knight and it's every bit stunning [View pics]

Well, legend has it that this scene was improvised by Heath. The big explosion was supposed to go off right when Heath pressed the button the first time. But when it didn't, Heath decided to continue acting. Well, if the scene was cut after the failed explosion, the makers would have lost a good amount of money. So, the actor's quick wit saved the day. But...

The thing is, we have only heard this tale from unverified sources. In fact, the making of the film on the Blu Ray version also doesn't talk about this. On the other hand, the Blu-Ray disc does have a section that says, "We rehearsed endlessly with Heath that morning. We walked him out, got him to do exactly what he was going to do, Chris Corbould [special effects supervisor] calling the explosions, where they would take place. We rehearsed it, I think, about twelve times."

Adding to that, the script does specify that Joker only walks out as the explosion occurs and there is no mention of the delay or the characters fidgeting with the detonator. Though, the scene was rehearsed over a dozen times before they actually shot for it. So, another possibility is that Heath might have improvised the scene during the rehearsals itself.

Well, whether the scene was improvised or not, nevertheless, The Dark Knight will forever remain one of the most iconic performances in the history of acting.