A minaudiere can easily make or break an ensemble look. Here is why actresses should try to keep away from clutches as much as they can...

Why do actresses need a clutch on the red carpet? Especially when they’re accompanied by an entourage. “Honestly, the last couple of red carpet appearances that I have styled, have been sans bag! Most of the time, actresses only bring along their phones and a lipstick,” says stylist Archana Walavalkar. Also Read - It's Expensive! Ananya Panday's sequinned outfit from Halpern Studio comes at an exorbitant price

Clutch cheerleaders would argue, but more often than not, a wrong clutch ends up ruining the whole ensemble and at times, makes the overall look quite busy. Also Read - It's Expensive! When Ananya Panday donned a gown the price of which matched that of a Nano car

At the Golden Globes, Amal Clooney, Julianne Moore and Jennifer Lopez accessorised their gowns with a statement clutch. However, the actresses who actually turned heads were the ones without it — be it Emma Stone, Heidi Klum or Katie Holmes, to name a few. Perhaps our desi actresses can take a lesson or two from their Hollywood counterparts? Also Read - International Women's Day 2019: Shaleena Nathani and 4 other stylists who run the show behind the lens

In India, women tend to feel incomplete without a handbag when they’re stepping out. A bag is considered the sign of having arrived in life. To carry or not to carry — that’s quite a dicey scenario. It may work wonderfully at times and totally backfire other times. Of late, actress Huma Qureshi wore her Amit GT gown with a totally unnecessary mini Dior bag. However, Shraddha Kapoor’s pick of a blue clutch worked well with her red Atsu gown. Lisa Haydon clearly loves her minaudières since she carries them on all occasions, of late. Recently, Deepika Padukone carried a clutch with her Jade sari though we weren’t a fan of the look, so the lesser said the better! 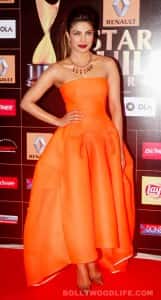 Do you think the actresses should ditch the clutch at the red carpet? Tell us in the comments section below!