H​ere's why Arijit Singh saying sorry to Salman Khan will spell more TROUBLE for him!

Arijit Singh clearly disappointed his fans by first apologising Salman Khan and then deleting the post!

Arijit has left his fans shocked and disappointed by apologising to Salman Khan first and deleting the post later...

Arijit Singh has for long enthralled us with his beautiful, melodious chartbusters and has always been in the news for same. But today, the talented singer became the talk of the town after he wrote a very public apology to Salman Khan and 'begged' him to include his song Jag Ghumiya in Sultan, after the buzz was created that the star has cut the number from the film. Also Read - Trending Entertainment News Today: Kartik Aaryan's replacement in Dostana 2, Ajay Devgn's Maidaan set destroyed, Indian Idol 12's 90s special

The singer's public apology on Facebook highlighted his issue with the Sultan star and invariably showed the actor in a poor light too. Immediately after he put the note, he retracted his statements and that has caused more furore. Sources close to the Aashiqui singer told Bollywoodlife that he was advised by his people to take the post down as it would spell trouble for him. Well, this although more shows Arijit in poor light because he did not stand by his words and was scared by the pressure a superstar like Salman Khan wields in the industry. Also Read - Arijit Singh's mother passes away at 52 due to cerebral stroke, soon after recovering from COVID-19

Twitter too did not take kindly to Arijit's act of first apologising and then taking the post down. His fans feel let down by him and the popular sentiment which is reverberating through the social media is: Also Read - Rahul Vaidya, Arijit Singh, Neha Kakkar and other celebs who did not WIN reality shows but are famous

What is Arijit up to! Going in the wrong direction mate! Focus on your singing! #Sultan #ArijitSingh

#ArijitSingh foolish to seek an apology from an arrogant actor.Salman is 50 and in the last phase.You are young.Maintain self respect.

So, this act of Arijit's will do him more bad than good, we think. We also hear that the singer shall soon give out a statement saying that this all was a mistake. What do you think about this controversy? Should a leading singer of Arijit's calibre should have been reduced to BEGGING for one song in a Salman Khan film? Do tell us what you think in the comment section below. 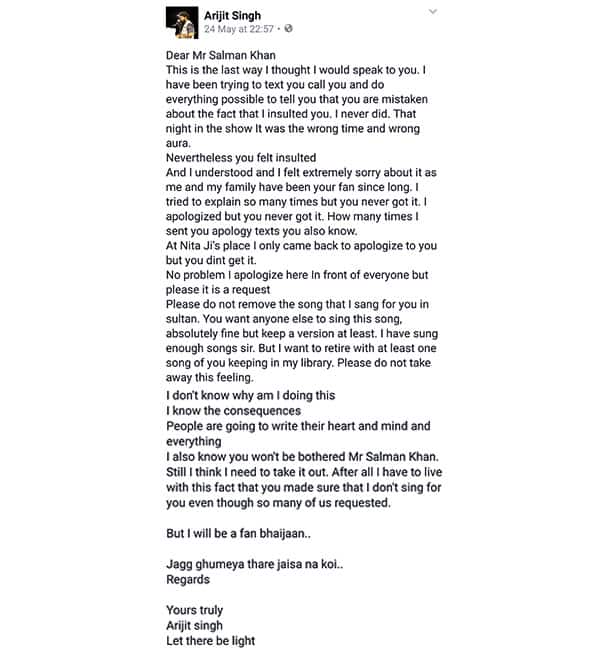