History has repeated itself with smashing box-office results for our Mastani, just like it was in 2013!

Deepika Padukone has time and again proved that she is here to stay. Be it her Om Shanti Om’s Shanti or Tamasha’s Taara, each character has been outlined to perfection by this suave actress who gets into the skin of every role and brings forth an enigmatic screen presence. If you don’t know what I am saying then you probably didn’t have an encounter with her recent attempt as Mastani yet. Fret not, you can catch a glimpse of that in a theater nearby. Also Read - Deepika Padukone's Padmavati starts rolling on a musical note!

Moving on, Deepika has repeated her exciting career graph’s success of 2013 in 2015 all over again. The year started with a slow yet gripping film by Shoojit Sircar, Piku leading on to her career’s most interesting choice only after Yeh Jawani Hai Deewani, Tamasha. The film may not have ranked well on the box office but it did not fail to leave an impression in the hearts of the masses who understood the deep context rooted within the glossy script prepared by the dreamer Imtiaz Ali. Also Read - IIFA Awards 2016 LIVE: Priyanka Chopra's melodious singing will leave you AMAZED - watch video!

Then came another box office hit by Sanjay Leela Bhansali, which we knew would fare well with the numbers. When a Bhansali film comes in the forefront, you don’t need words to critic it, there are some films that go beyond the conventional story-telling way and leave you with a grand cinematic experience to cherish for long. With Mastani, Deepika shed her girl next door look and donned the ethereal demeanor of a historic character screaming to come back to life. Also Read - Bajirao Mastani and Befikre have set Ranveer Singh APART from the rest of the actors, suggests trade expert! 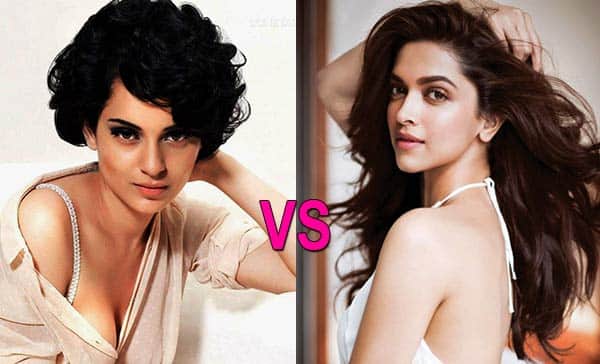 While Deepika was Piku, Taara and Mastani, her contemporary Kangana Ranaut’s Tanu and Dutto was the one that stood out. The actress was also dealing with many controversies regarding her film with Sunny Deol, I Love NY, which was released soon after Tanu Weds Manu 2 probably to cash in n the success of the much talked about film. And then came Katti Batti that slumped the entire year for the Queen star, which otherwise would have been a successful stint with TWM2.

While the actress was still trying to recover from the great hole Katti Batti created in her otherwise great career, rumours started pouring in of her starry tantrums. Apparently Kangana Ranaut, who edited a few portions of her film’s script, was later in news asking credits for the same. The actress also wanted to have the credit of a co-director in Vishal Bharadwaj’s forthcoming flick Rangoon. Says an insider, “Kangana has told them she wanted to be billed as co-director of the film. This would be a first in Bollywood if the makers agree to her demand. Never before has the leading lady of a film wanted to share credit with the director. And that too, someone established and respected like Vishal.”

Now that is a little too much to ask from your director now honey!

With so much going on and Kangy not even attending the awards function, we wonder how the actress will maintain her hold as one of the leading ladies in the country because as they say nothing is permanent, not even fame!