Here's how Ram Setu stars Akshay Kumar, Nushrratt Bharuccha and Jacqueline Fernandez are taking care of each other amid the covid-19 scare

Ram Setu co-stars Akshay Kumar, Nushrratt Bharuccha and Jacqueline Fernandez are ensuring to be there for each other even though the shoot is stalled and they are far apart.

The Ram Setu crew was an excited lot as they started shooting recently. However, the shooting has come to a standstill after the lead actor Akshay Kumar tested Covid- 19 positive. Following this, 45 other crew members who were on the sets of the film have also tested positive. The film's lead actresses Nushrratt Bharuccha and Jacqueline Fernandez have isolated themselves and also tested for coronavirus themselves, to avoid the threat. But even though they are not being able to meet on the sets of their much-awaited film, the three actors are keeping in touch and checking on each other every day. Also Read - Atrangi Re song Chaka Chak: Sara Ali Khan tries to win Dhanush over with her seductive power moves – watch video

Nushrratt took to her Instagram story a while ago and revealed a screenshot of a conference call between her, Akshay and Jacqueline. Along with the picture, Nushrratt wrote, "Checking up on each other! Far apart but together in spirit!!” She even shared that she has too self-isolated herself. Along with the boomerang video, she wrote, "Isolation, Steam inhalation, Precautions, Stay Safe." Check out the picture from her story below: Also Read - Akshay Kumar's Sooryavanshi and Ranveer Singh's Simmba to have cameos in Ajay Devgn's Singham 3? Rohit Shetty REVEALS [EXCLUSIVE VIDEO] 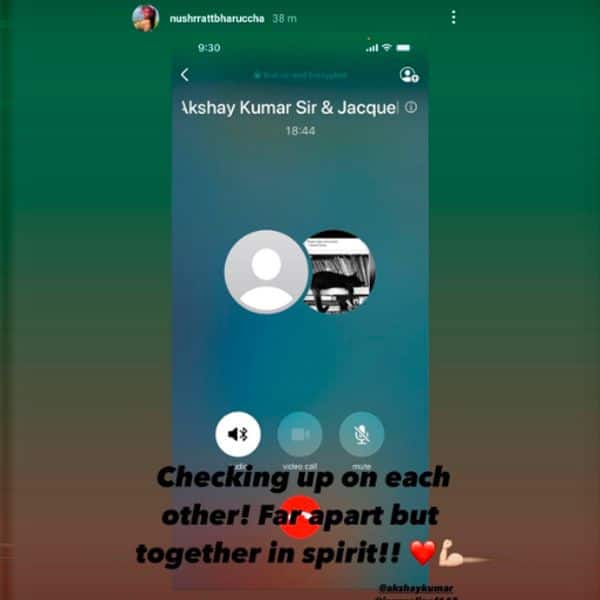 It is heartening to see the team bonding so well and taking care of each other during these testing times. We really hope the situation turns better and everybody is able to get back on the sets, without any scare of the deadly virus. But till then, it will be technology to the rescue, to keep all of us, as Nushratt says, "Far apart but together in spirit."

Ram Setu is set to release next year and we will be seeing Nushrratt in projects like 'Chhorri', 'Hurdang', 'Janhit Mein Jaari', 'Ram Setu' and 'Ajeeb Daastaans'.