Here's how Salman Khan prepared himself for the 2002 hit-and-run case verdict!

The actor was acquitted from all the charges by the Bombay High Court yesterday!

You will be surprised to see what the Sultan actor was doing just a few hours prior to his verdict...

We all know that Salman Khan was acquitted of all charges in the 2002 hit-and-run case by the Bombay High Court yesterday after the prosecution failed to prove that the actor was behind the wheel or intoxicated on the day of the accident. Salman was accused of driving over a few pavement dwellers while intoxicated, which resulted in the death of one person. However, the judgement cleared all such accusations. Also Read - Trending Entertainment News Today – Zareen Khan CLAIMS she was told to put on weight for Salman Khan's Veer; Farhan Akhtar announces new release date of Toofan

Salman was present when the final judgement was being read out, but did you know what he was doing just a few hours before reaching the court? He was cycling. No, not in a gym but on the road. Just a few hours before the verdict, the actor was cycling on the roads of Mumbai. Also Read - Zareen Khan CLAIMS she was told to put on weight for Salman Khan's Veer and it backfired on her

He then went to ND Studios, Karjat where he was shooting for Sultan. He was actually not going to attend the court proceedings, but in a rare occurrence at the Bombay high court, Justice A R Joshi sprung a 2009 amendment to the Criminal Procedure Code for actor Salman Khan, asking him to appear in court on Thursday as the verdict in the 2002 accident case was delivered and then furnish a bond to ensure he would be present in a superior court if an appeal is filed. Also Read - Salman Khan's Bhaijaan to release on Diwali 2022

Salman rushed to Mumbai from Karjat and reached by 12.10 pm, after which the judgement was read out to him and the people present inside the courtroom. He completed all the formalities after which he was acquitted of all charges and later went back to his Bandra home.

Check out the pictures of him cycling before the verdict yesterday: 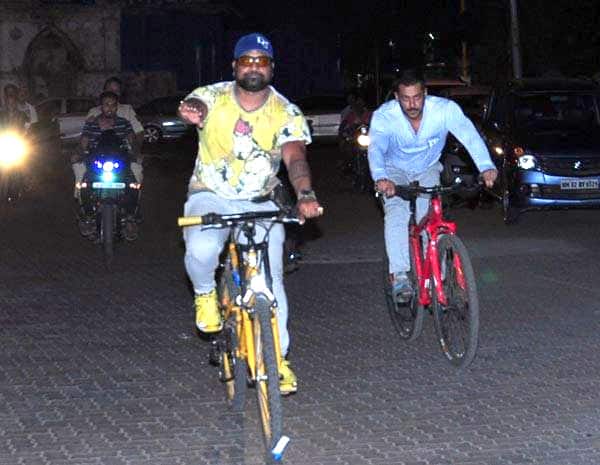