As rain batters Chennai, Kollywood celebs have joined hands with the volunteers and are doing their bit to provide relief

Chennai is facing its worst rains ever. Not just roads, even houses, hospitals and MNC's have been flooded leaving thousands stranded without food,water and shelter. Also Read - After Shah Rukh Khan, Akshay Kumar donates Rs 1 crore for Chennai flood relief!

Under these dire conditions, many brave volunteers are venturing out to help the people in need by providing food, water and even evacuating people who are stuck. The film inudstry is also doing their bit to provide relief to those in need. Actors like Siddharth, Dhanush, Jayam Ravi and others have joined hands with the volunteer groups to help the flood victims. Also Read - Rajinikanth proud of all his fans' efforts in handling the relief operations of Chennai Floods!

Actor Siddharth has been the most active celeb in these testing times as he has been personally co-ordinating with volunteers and guiding them to people who are desperately in need of help. The actor urged people in need of help to tweet using #ChennaiMicro so that he and his team can do their best to provide relief. Turning into a real life hero, the Rang De Basanti actor is providing food packets and also launching rescue missions with the help of social media. Teaming with RJ Balaji, Siddharth has been continuously tweeting and providing help for the past two days. Check out his tweets: Also Read - Popular musician Stephen Devassy to perform for Chennai floods victims!

Please send tweets to @rj_balaji & me. We are trying to contact groups to spread information for stranded people. Every message/call counts.

If anyone has innova or Scorpio cars to spare please contact us. We need more vehicles. #TNflood #chennaimicro — Siddharth (@Actor_Siddharth) December 2, 2015

If you can organise food packets in chennai please contact me. We will have it picked up and delivered. Batches of 50-100 packets. #TNflood — Siddharth (@Actor_Siddharth) December 2, 2015

Actor Dhanush had managed to arrange for biscuits and snacks for those in need and has been continuously tweeting and retweeting rescue calls and helpline numbers. Check out few of his tweets below:

Have stocked up 600 biscuit packets and 400 rusk packets. Unable to reach it to people.@RJ_Balaji @Chinmayi @galattadotcom help me out — Dhanush (@dhanushkraja) December 2, 2015

Actor Jayam Ravi also managed to do his bit by giving out food packets to people near Santhome and Marina beach.

Bread, rice and other amenities will be distributed in slums affected along the shores of marina in Santhome area. Pls spread the word. — Jayam Ravi (@actor_jayamravi) December 2, 2015

Meanwhile R Madhavan took to twitter to spread awareness about the gravity of Chennai floods to the world. The actor has been constantly tweeting on twitter, guiding rescue teams to reach the needy in time.

Food packets and food getting wasted in the slums as everybody is heading there.Consider distributing in flooded apartments too. — Ranganathan Madhavan (@ActorMadhavan) December 3, 2015

Stomach ailments and infections.proper hygiene will be key.Food N water may be contaminated.but with proper attn cn B contained nd overcome

Ajith and his wife Shalini have been distributing food packets to the people stranded in rains. 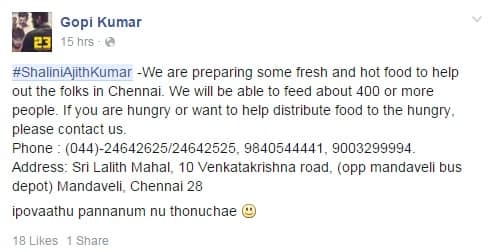 Other than Rajinikanth and Allu Arjun's financial help for relief work from floods, other stars like Shruti Haasan, Trisha Krishnan, Hansika and others have been helping out people by tweeting any helpful information to common man.

Horrific rains In chennai my heart really goes out to everyone there :( please pass this on !!! pic.twitter.com/8nbNJSB6S5

My heart is breaking Pray for Chennai

Suriya, who is shooting for his film abroad, raised his concerns and expressed his frustration on Twitter.

Feeling helpless for not being able to reach out to you all in this hour of need. I'm stuck outside the country, desperate to get back!!

It's both heartbreaking and heartwarming to see so many survival stories on my TL. Hope you all are safe and have all the helpline nos.

Does anyone here knows verified helplines for boats, I see so many cries for help in Chennai and Cuddalore.. #ChennaiRainsHelp