Here's what Simbu and Anirudh have to say about the controversial Beep song!

When Chennai is just trying to get back on its feet after being battered by rains and floods, Tamil star Simbu and music composer Anirudh have courted controversy for the recently leaked Beep song. Also Read - Simbu's mother gives an emotional speech as the Beep Song controversy intensifies - watch video!

The song that was leaked on the internet over the weekend has many expletives and cuss words which portray women in wrong light. Though, the song has been taken down, the controversy around the song is yet to die down. Many music lovers as well women welfare organisations have strongly condemned the song as disrespectful to women. Though the cuss words being used in the song are censored with beep, many have stated that it is quite evident what the singer is trying to convey from the song and it is extremely offensive to women. Also Read - Beep song controversy: Chennai Police directs Indian airports to detain Simbu if he plans to travel outside India!

The Beep song, sung by Simbu is said to be composed by Anirudh. After finding himself in the eye of the storm, Anirudh has denied being part of the song. Here's his official statement: Also Read - Thangamagan song Tak Bak: Dhanush and Amy Jackson's playful flirting lights up this jazzy number - watch video! 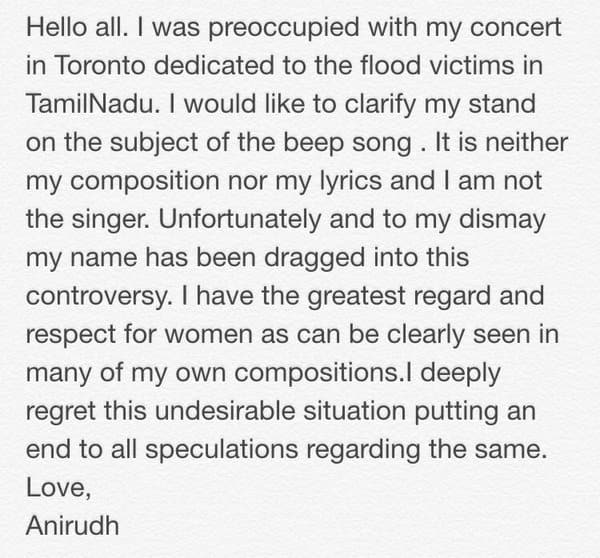 Simbu, on the other hand, has admitted that Beep song was written and composed by him, but he had no intention to upload it on the internet. Simbu later claimed that someone has leaked the song from his mobile. Simbu ended the statement saying that he has the right to compose and sing what he wants, and leaking it online was not his intention.