Here's why Ranbir Kapoor's social media debut was an #EpicFail!

The Bombay Velvet actor was on air for about six hours on six different social networking sites but sadly, none of them worked!

So when I got to hear that Ranbir Kapoor is finally making his much awaited social media debut, I was pretty much excited for the fact that he would either talk about his upcoming film Bombay Velvet, or clear stuff about his engagement rumours with Katrina Kaif or something that'll be interesting. But you know what just happened? We were fooled to NOTHING! Yes 'nothing' at all! Also Read - Anurag Kashyap's daughter Aaliyah FINALLY breaks silence on #MeToo allegations against her father

The Bombay Velvet actor was on air for about six hours on six different micro-blogging sites like Facebook, Twitter, Vine, Snapchat, Tumblr, Instagram and was mighty active on all throughout his six-hours stretch. But his attempt at 'follow me' stooped so horribly wrong that I actually went back thinking- is he really Ranbir Kapoor? Or even if he isn't, why is he defaming himself with such a terrible marketing gimmick? Wait, why did I even follow him? Well, I might sound too harsh but let me give you a glimpse of his terrifying torture: Also Read - Tuesday Trivia: Did you know Ranbir Kapoor walked out of THIS mega-budget period film and was replaced by Hrithik Roshan?

Hey! Watch me backspace Also Read - When Anushka Sharma accepted getting a lip job done and shut down trolls like a boss

And that's how I wrote my first Tweet! #RanbirHitsA6 pic.twitter.com/NMugZnLYNz

The Barfi! actor started off with a lamest video showing off on how he struggled tweeting his first tweet! 1 2 3...backspace! Like seriously? Those hands don't even look like Ranbir's !

I am proud to be a Flopfie 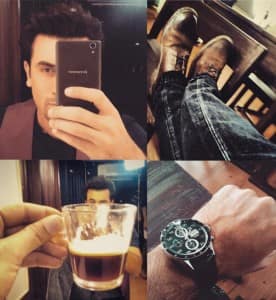 Then came a series of pictures aping the selfie trend. Shoefie with his shoes, watchfie with his watch and the ultimate hairfee with his hair doing the talk. I mean, what was he even thinking while putting this up? Highfie?

Okay it's no film, no self PR, it was just a new edition phone Lenovo A6000 that he was endorsing on all the social networking sites. Clicking badfies and saying, "I can't find my Lenovo", now who cares what do you do with your phone? Real Ranbir, please stand up!

LMAO made us cry!

Having received a barely good response, the Jagga Jasoos actor then started playing around with MTV fame Hoezaay. He put up another lame video of him shaking his booty and said - " I laughed my a** out" Okay, this was 1 percent funny but where was this going? Beauticians required? Really?

This day has been so exciting! Having an awesome time. #RanbirHitsA6 pic.twitter.com/XRvu4Qfr6k

A lastly, a collage of six faces of Ranbir which I would wish to quote it as, 'Yaay I am so excited', 'F**ck You,' 'I did it', 'my fans love me so much', 'I think I should stay back on twitter forever', 'I think even Katrina should join Twitter, 'Will she agree?'

Well, whatever the faces might mean but if this is what you mean with your 'social media debut' then sorry, you are better off without it! Phew!