Varun Dhawan had a bit of a rough start today when he went to the polling booth for the BMC Elections and couldn't find his name on the list. He seemed deeply upset when ANI caught up with him. He said, "My name has not shown up in the list unfortunately, it's bizarre because I voted last year. Will find out from EC where is my name." The mention of voting last year invited a lot of trolling on social media. Apparently, he also mentioned voting for Rajya Sabha somewhere and this caused a lot of furore on social media.

While generally actors don't pay heed to such things on Twitter because they have better things to do, Varun decided to accept that he had indeed made a mistake and even clarified his stand on Twitter. When some one pointed out the error on Twitter, Varun replied, "Hahah I don't it was a slip of the tongue I meant the lok sabha elections for which I voted in 2014." However, it came as a surprise that after being a sport and admitting to his mistake, Varun went ahead and deleted the tweets from his account. But we have the screenshots right here for you. Check them out... Also Read - Priyanka Chopra, Katrina Kaif, Kareena Kapoor Khan and 4 more Bollywood actresses who raised brows with risqué necklines – view pics 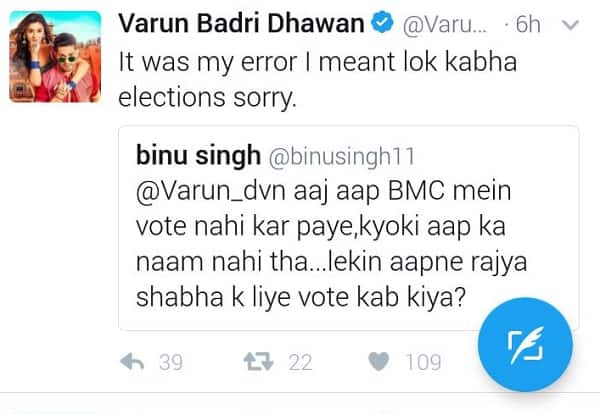 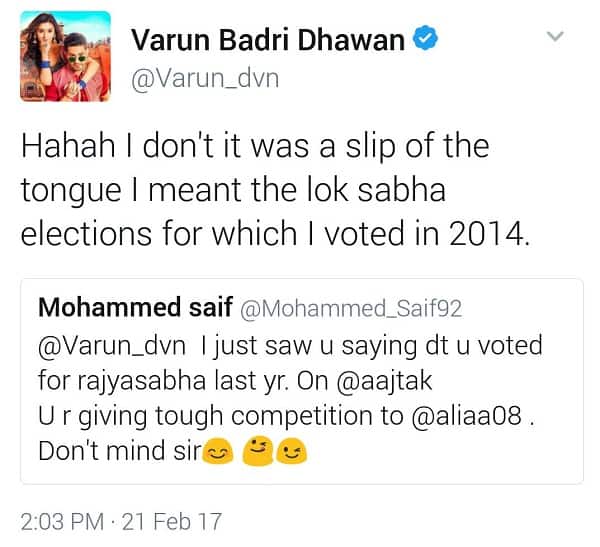 Varun Dhawan is gearing up for the release of Badrinath Ki Dulhania which hits theatres on March 10. It will be a Holi treat for his fans. He is paired opposite Alia Bhatt in the film and we feel he makes the best jodi with her on screen. There is striking chemistry between the two and the way they portray love, it's simply magical. Hence this is one film we are totally rooting for.