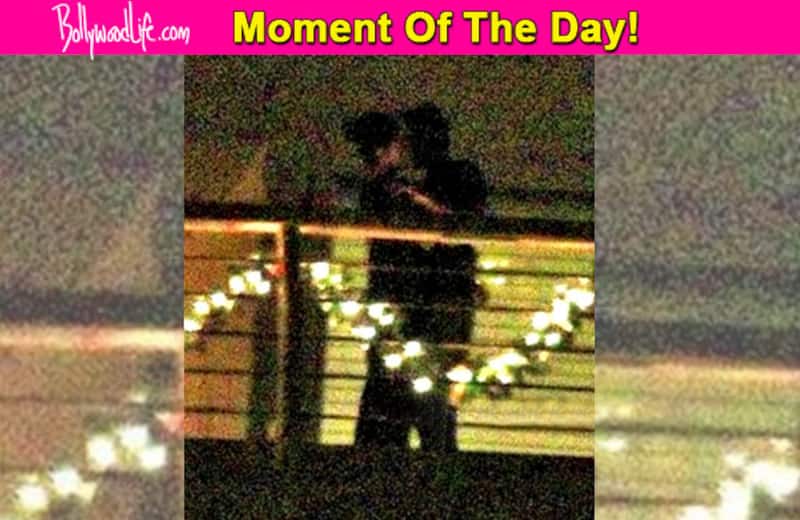 And you thought they were going through a rough patch? Here's a proof that they're madly in love...

A lot has been reported about Ranbir Kapoor and Katrina Kaif's unsure relationship! Earlier this month, some even suggested how the two are planning to break up relying on Kat's statement about fearing to get married with a man who doesn't love her completely! But turns out Ms Kaif's worries are finally coming to an end as the year’s ending! Yes! While recently we had come across her first official picture with the Kapoor Khaandaan during Christmas! Here check out this loving snap that proves Ranbir and Katrina are very much in love and there's no turning back... Also Read - Ranveer Singh-Deepika Padukone, Aishwarya Rai Bachchan-Abhishek; when distasteful separation rumours of Bollywood's loved couples grabbed eyeballs

All thanks to these curious shutterbugs, who were outside Ranbir-Kat's love pad in Bandra last night, the sweethearts were spotted sharing an intimate moment under the moon light! We hear Ranbir was chilling in his balcony for over an hour following which, Kat arrived after wrapping up a song sequence for Fitoor and there they were - a kiss to relieve all the stress from the day gone by! Aww, how cute is that picture? Also Read - Alia Bhatt in Heart of Stone to Deepika Padukone in Pathaan: Bollywood heroines who will kick some b*tt in upcoming new action movies

Raju Shelar, the photographer who snapped this one in a million picture revealed, “Ranbir was sitting on the balcony of their Bandra apartment, drinking beer since 9 pm. Katrina walked in around 10.30 pm. The two kissed and chatted together for about half an hour.” Also Read - Varun Dhawan wants to play THIS role in Alia Bhatt's life once she becomes a mommy

I think now this is way more than enough to dismiss all the negative rumours around Ranbir-Kat's relationship! Haters gonna hate but admit it, they ARE. IN. LOVE!