In pics: Aamir Khan gets mobbed by fans on Dangal sets!

Due to this, the shoot got delayed

Aamir Khan who is currently shooting for his upcoming sports biopic, Dangal in Ludhiana was greeted with a street full of fans. Mr Perfectionist who was filming in a house, was stuck on location for 8 hours due to the rage exhibited by his fans. Khan was flabbergasted to see the maddening crowd around him. Also Read - What is Aamir Khan's next film after Thugs Of Hindostan? Here's the truth

The actor was mobbed by his fans and despite the security on location. Due to this, it was impossible for him to go to his vanity van between his shots. He then decided to stay put in the house till his shoot for the day was over.By the time he got done, the entire street was filled with fans and his entourage took more than an hour to get him off the street. Also Read - Aamir Khan reviews Rani Mukerji's Hichki; calls it "one of the most enjoyable films"

Dangal is a film based on the life of Haryana-based wrestler Mahavir Singh Phogat. The actor has left no stone unturned to give his best in the film like always. He beefed up himself and actually looked like a wrestler. During an interaction with media Aamir said, "I have put on till 90 kgs and that is not good for my health and again I have to come back on the weight of 60 to shoot for their younger version". Also Read - Any guesses who was the first one to wish Aamir Khan on his 53rd birthday? Find out here!

The actor is even co producing the film and it is all set to hit the theatres in Christmas 2016. 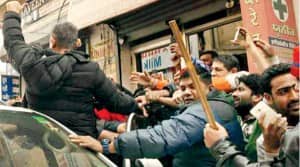