India vs Australia live: This is the HILARIOUS way Rannvijay Singha and Manish Paul are supporting India!

While our Indian seamers attacked the Australian batting line up, actors Rannvijay Singha and Manish Paul are seeing the match at their home along with Harman Singha and a few friends. But to connect with their fans and get in more support for the match they are LIVE on Facebook...

The actors are live on Facebook and they are going all out to make the match experience fun...

While our Indian seamers attacked the Australian batting line up, our Bollywood celebrities have been supporting the Indian team from the get go. While many actors, singers, directors, producers and politicians tweeted their support, two actors have come up with a very unique way to support the team. Actors Rannvijay Singha and Manish Paul are seeing the match at their home along with Harman Singha and a few friends. But to connect with their fans and get in more support for the match they are LIVE on Facebook. They are giving live commentary while seeing the match and their comments are really HILARIOUS. Also Read - After India beat Australia, Anushka Sharma reveals why hubby Virat Kohli is 'so easy to love'

Not just the comments, but their actions too. The actors were seen hooting and dancing when wickets fall, but what made us laugh was their 3 Idiots pose. The showed their bums and were like 'jaha pana, tusi great ho, taufa qubool karo.' They were bending down, but were seeing the match through their legs as they didn't want to miss even one moment from this crazy encounter. Also Read - India vs Australia: Narendra Modi, Amitabh Bachchan, Sachin Tendulkar, Preity Zinta CONGRATULATE the Indian team after their WIN!

This ICC T20 World Cup 2016 match is a do or die match for both Australia and India. Whoever wins will go into the semi-finals of the competition and with a long history between the teams, this encounter will go until the last ball. While Australia started off well, scoring 50 runs off 3.4 overs, the Indian teams has taken wickets at regular intervals to get right back into the game. Every wicket saw celebrations from Manish and Rannvijay. The duo gave some expert comments too. You can see their HILARIOUS commentary LIVE on Facebook throughout the match. Also Read - India vs Australia live: Ayushmann Khurana's LIVE tweet commentary is something to watch out for! 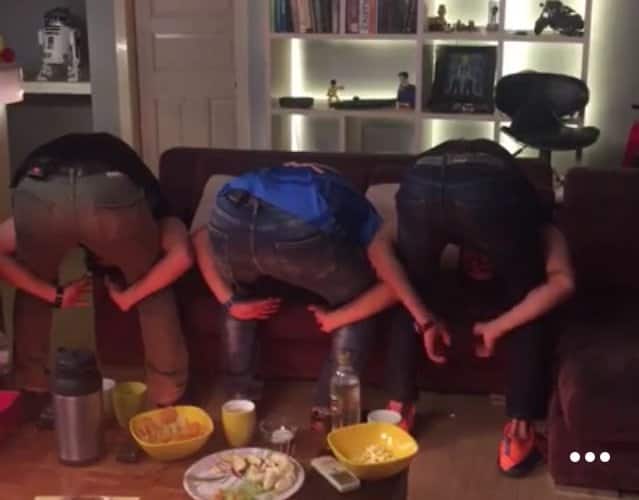 Currently they have taken an innings break along with the teams, but don't worry they will be LIVE again once the second inning starts. Till then you can check out their first innings video below!