Indu Sarkar movie review: Madhur Bhandarkar's political drama paints a grim picture of an India that was still struggling to find its identity

Indu Sarkar shows an India which had to fight for freedom twice. That makes it a must watch. 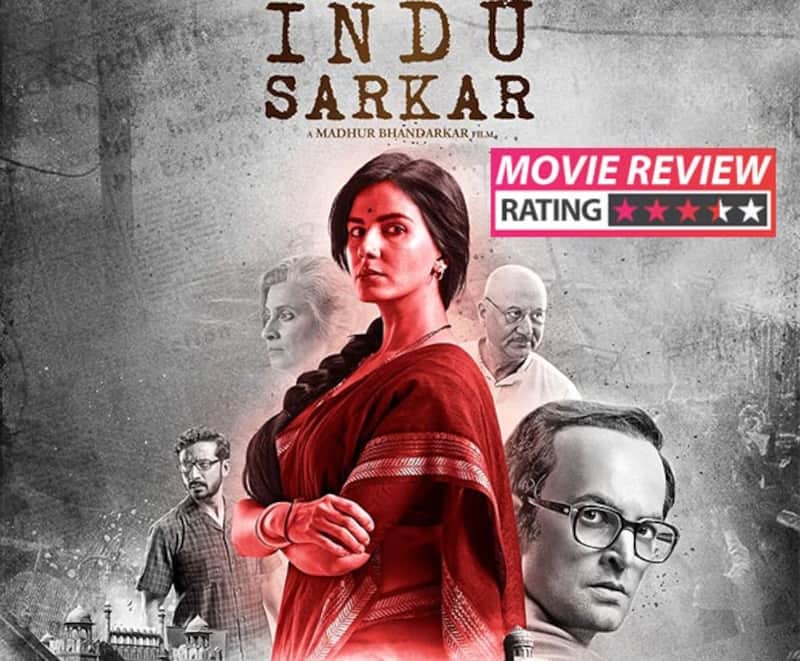 After a lot of suspense over its release, the Supreme Court finally cleared Indu Sarkar for release, a day before its scheduled date with the theatres. The film, that is set during the Emergency period that lasted from 1975-77, promises to be a riveting tale of goings-on of the time. After a dismal run at the box office with his last few films, filmmaker Madhur Bhandarkar will surely hope to revive his career and redeem himself with this political drama. But will a tale of the misgivings of a government manage to fetch him success? Let's find out... Also Read - Arjun Kapoor, Kartik Aaryan, Salman Khan and others celebrate Varun Dhawan's father and filmmaker David Dhawan's 71st birthday

Indu Sarkar tries to examine the Emergency period through the eyes of its protagonist, Indu Sarkar. Indu (Kirti Kulhari) is an orphan girl with a defined stammer due to which she is never adopted from the orphanage that she has been brought up in. Finding solace in words, Indu aspires to be a poet, but is discouraged from doing so, prodded instead to be a good housewife. Without a sense of direction, Indu is quite happy when Navin Sarkar (Tota Roy Chowdhury) marries her, providing her with a home, and more importantly, a surname. This guy, Navin Sarkar, is a sychophant. He is the quintessential babu, who loves the comfort and promise of a cushy government job and detests the public who questions his employer. He is the 'yes man' to the Development Minister, who tells him to milk the Emergency period for his benefit. Now, the fact that her husband is a government employee hasn't bothered Indu at all until she tells him about the protests against the Emergency that she had witnessed at the market and he reprimands her for the same. Committed to her role of being the dutiful homemaker, Indu turns a blind eye to the injustice all around her, till, in a turn of events, she finds herself to be the sole caretaker of two kids, whose parents were killed in a government-organised slum demolition. Identifying with the struggle of the orphaned kids, she gives them asylum. But her husband, who is a loyalist of the reigning government, throws a fit over this and asks Indu to choose between him and the kids. She obviously does what she has to and moves out of his house. Unassumingly she also becomes a part of the underground movement against the government, led by Nanaji (Anupam Kher). The government in question here is obviously the one that had imposed the Emergency. And while there's only a glimpse of the then Prime Minister (Supriya Vinod), it is her son, Chief (Neil Nitin Mukesh) who does the ordering. (Also read: Supreme Court refuses to put a stay on the release of Madhur Bhandarkar's Indu Sarkar) Also Read - Kangana Ranaut and Page 3 director Madhur Bhandarkar to join hands for film on Kashmiri singer murdered by terrorists? Here's what we know

Madhur Bhandarkar has painted a very grim but vivid picture of the Emergency period that had lasted a total of 21 months. It is an India that was still hungover on the freedom struggle, an India that was used to a century of being ruled and was lost with the newfound freedom, an India that was yet to find an identity, an India that was yet to open up to the world. The filmmaker has brought these aspects of the recently Independent India to the fore, quite beautifully. This is a period that is usually ignored by history textbooks as well as films and hence, it is a refreshing change to witness the struggle that went into the making of the India we see today.

Besides that, the film obviously belongs to Kirti Kulhari. Her Indu stammers but never minces her words. She speaks her mind even if it takes a while longer for the words to come out. Playing with the risk of sounding too preachy, Kirti manages to portray Indu's sense of righteousness and her inherent vulnerability with equal ease. And after a stellar performance in Pink, Kirti nails it in the courtroom scene in this one as well, making you reach for the tissue with her emotionally charged act.

The fact that the government remains faceless for the most part of the film is indeed a dampener. While you have Neil Nitin Mukesh playing the forever irritated 'Chief' you can't help but pity the weakly sketched character he has been handed out. In the few scenes that he has, Neil's character is restrained and vague. Agreed that he was playing a role inspired by a real politician, but since the film was anyway a fictional account, couldn't his character been meatier. It just seemed like a charade. Also, the fact that makers had to chop the character's mother, the Prime Minister's role in the film seems to have affected it adversely. Or for that matter, why did even Anupam Kher, who played a character similar to that of Chandrashekhar Azad from Indian freedom struggle, have such a puny role? While we are sure that the filmmaker wanted to tell the tale through the eyes of the protagonist, it wouldn't hurt to have other well-written characters in the film too.

Also, after a rather engaging first half, the film slackens a bit in the second half, with a very stretched out qawwali sequence, which intends to show the inner turmoil of the Chief but only serves as a yawn-fest.

Indu Sarkar is an account of, what was touted in the film to be, India's second freedom struggle. After a steady dose of pre-independence stories, it is indeed refreshing to see the struggles that plagued a recently free India. Madhur Bhandarkar is back to doing what he does best - sketch immensely powerful female characters. If you have a taste for political dramas, Indu Sarkar will surely engage you. But even if you are not a fan of the genre, you must watch it for Kirti's stupendous performance, if nothing else.