Insta-Stalker alert! These pictures of newlyweds Joe Jonas and Sophie Turner prove they were always madly in love with each other

After the Jonas Brothers' performance at the Billboard Music Awards 2019, Sophie Turner and Joe Jonas became man and wife in a surprise wedding at a Chapel in Las Vegas

After Priyanka Chopra and Nick Jonas’ royal wedding at the Umaid Bhavan Palace, Udaipur, India, Game of Thrones star Sophie Turner and Nick’s brother Joe Jonas’ wedding had become the talk of the town. While the couple has been dating longer than Nick and Priyanka, since November 2016, to be precise, the Indian wedding fueled stories about Sophie and Joe’s upcoming wedding. Many even strongly believed that the lovebirds were going to get married in France in a beautiful Summer wedding. However, they have caught fans off-guard as they got married in a surprise wedding in Las Vegas yesterday. Also Read - Not December, Shahid Kapoor and Mira Rajput to get married on June 10?

After performing at the Billboard Music Awards 2019, the Jonas Brothers headed for another private ceremony in Vegas which was none other than Joe and Sophie’s surprise wedding.

While fans can't wait for the newlyweds to post some pictures from their impromptu wedding, it was their friend DJ Diplo who was the first one to share videos and pictures from the wedding. Sophie and Joe exchanged wedding vows at a chapel. According to reports, several celebrities including Khalid, were present to witness the nuptial that was officiated by an Elvis Presley impersonator. Sophie looked beautiful as she walked in wearing a white V-neck ensemble and veil, while Joe and brothers Nick and Kevin waited at the altar all suited up. Sophie and Joe were pronounced husband and wife as they exchanged ring pops as wedding bands.

In one of the videos shared by DJ Diplo, we see the bride Sophie walking down the aisle and being joint by her J-sisters Priyanka Chopra Jonas and Danielle Jonas. Meanwhile, Joe was dressed in a grey waistcoat for the ceremony.

Sophie Turner and Joe Jonas, who had been very secretive about their romance in the beginning, officially got engaged in October 2017 and shared their engagement news on social media. While Joe had captioned the picture with, "She said yes," Sophie had written, "I said yes." Joe and Sophie’s love story is no less than a fairytale and their Instagram account is proof of that. So, we decided to do a little stalking to bring to you the best of the lovebirds’ pictures. Have a look:

With my love in the mountains ?

Joe Jonas and Sophie Turner are the happiest together

My Valentine gets a surprise birthday party because she’s the fucking best. ?

Happy Valentine’s Day my love. You make me the happiest.

Wishing her Valentine in the most adorable way

When love got colourful for the Jonas Brothers’ comeback single Sucker 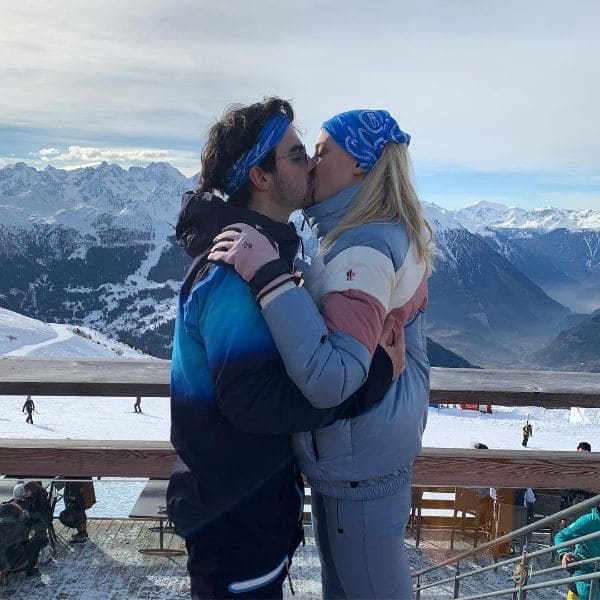 With my love in Paris ♥️