Salman Khan will be soon flying to Ladakh to begin shooting for Kabir Khan's Tubelight. But now this latest picture suggests he is secretly also shooting for Dabbang 3. Confused?

Talk about some exciting news! You've got to read on to find out the full story...

So we knew for a fact that Salman Khan will be soon returning with Dabbang 3, probably after he wraps up Kabir Khan's Tubelight. Producer Arbaaz Khan had himself confirmed the same saying, "Next year we will start working for Dabangg 3. I cannot say the exact time, but next year for sure." In fact, even Salman spoke about Dabbang 3 at the Freaky Ali trailer launch yesterday affirming, "Yes we brothers are working on the script of Dabangg 3." Also Read - Da-Bangg Tour: Salman Khan sings his heart out as he takes the center stage at Birmingham - watch video

However, coming nothing short of a surprise, Salman's stylist Ashely Rebello just posted this on-set picture of Salman in his Chulbul Pandey avatar, leaving everyone confused if Salman has already begun shooting for Dabbang 3. No seriously! He captioned it saying, "Moment of Nostalgia! Dabaang 3? Maybe! Haha #SalmanKhan styled by #AshleyRebello." Also Read - Salman Khan's Dabangg 3 casting poll opens! Kriti, Amy or Waluscha - who's your pick?

Following which, fans literally started celebrating the return of Dabbang where some even dropped in suggestions saying Salman should actually consider reuniting with Katrina Kaif in Dabbang 3. Also Read - Salman Khan is BACK with Dabbang but with a twist - watch video 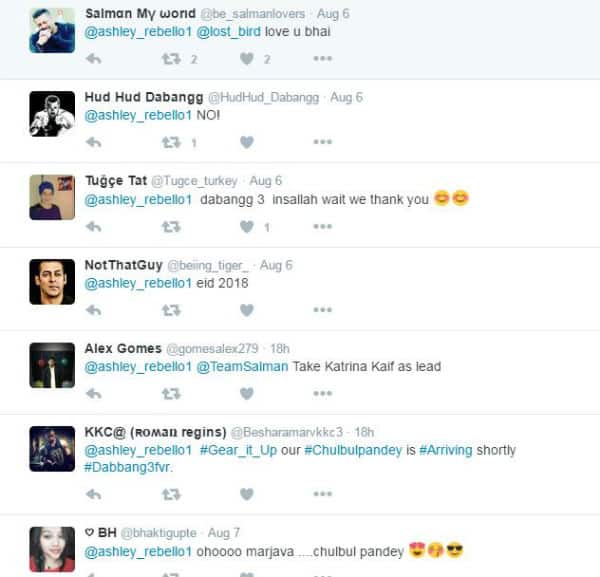 Well, you wish but guess you need to calm down guys! This Chulbul look is NOT for Dabbang 3 but for an ad campaign that Salman's shooting right now. Yes! A source EXCLUSIVELY reveals to us, “Salman is shooting for a special ad for a Dubai based Theme Park. This whole photoshoot will be used as a part of a promotional campaign for the exotic park."

So that's about it guys! And of course, not to forget, Salman Khan will be flying to Ladakh tomorrow to begin shooting for Tubelight. Stay tuned to BollywoodLife as we'll be breaking all the exclusive updates on the film, right here!