Is Shahrukh Khan having an affair with Priyanka Chopra? 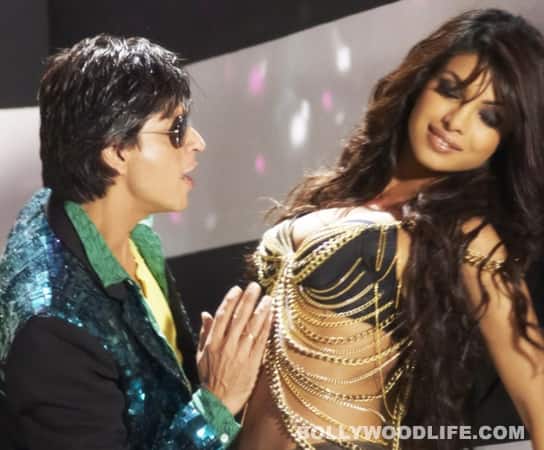 Also Read - Priyanka Chopra all set to part with her most PRIZED possession ever? Read Exclusive Deets

After being loyal to his wife for 20 years, Shahrukh Khan is reportedly seeing his Don 2 co-star Priyanka Chopra and they are quite an item

Shahrukh Khan has always maintained a very ‘loyal to my wife’ image in tinseltown, even as he romanced so many beauties on the big screen. Seeing pictures of Gauri and SRK in film and fashion magazines only added to the aura of their ‘sacred’ marital relationship. The only leading ladies he was rumoured to have had a 'thing' with are his fave co-stars Juhi Chawla and Kajol. The gossip seemed obvious, since he had some of the most successful films of his career with them. Apart from that, it was Deepa Sahi in Maya Memsaab whom he got intimate with in order to show great chemistry in that famous sex scene. Otherwise, King Khan’s image has been the cleanest amongst the Khans, especially where extra-marital goings-on have been in focus. But it seems that now, after fathering two lovely kids and doting on Gauri for a couple of decades, Shahrukh is going through a mid-life crisis. (Or a mid-wife crisis, shall we say?) These days, showbiz parties and gatherings are not complete without people talking about the torrid affair SRK is allegedly having with his Don 2 co-star, hottie Priyanka Chopra. Also Read - Akshay Kumar, Mallika Sherawat, Abhishek Bachchan, Anil Kapoor, Madhuri Dixit and more stars whose songs made our childhood damn awkward

It’s been more than six months that the ‘thing’ has been on, they say. Sharing spicy bits, the rumourmongers tell us that it was at one of SRK’s private dos that Gauri had a spat with hubby dearest over inviting Priyanka. Gauri was backed by Twinkle Khanna, and understandably so – remember the Akshay Kumar-Priyanka affair (during Aitraaz) that had serious implications? Hmm, looks like Tina knows only too well the love games that PC is capable of playing! And so she has warned Gauri. SRK meanwhile is simply saying he is fond of Priyanka, gushing about her good looks and her ‘talent’ – and insisting that there is nothing more to it. He has never denied his fondness for Kajol and Juhi as well, with the latter being his business partner in film production and the Indian Premier League. But Priyanka seems special, as is evident from the way he hugs her or interacts with her, or pays surprise visits to her house. He recently said in a newspaper interview that she is his “tame rat” and how he loved getting “kinky” with her in a scene in Don 2. Well, well, so much for a 46-year-old man’s fantasies! But these wet dreams might just die down after Don 2 releases. But here's more dope: SRK-Priyanka shall soon be hosting the Zee Cine Awards in Macau in January 2012. Before that, they will head to the Dubai International Film Festival in December - a couple of weeks from now. The question is, will Gauri accompany SRK at these events? She was seen alone at Boman Irani's son's reception recently, which makes us wonder if things are fine between the couple. Tell us what you think: Are Shahrukh Khan and Priyanka Chopra an item? Also Read - Did you know Anil Kapoor was skeptical on playing Priyanka Chopra's father in Dil Dhadakne Do?