Is the uncanny resemblance between Deepika Padukone and Priyanka Chopra's different attires a mere coincidence?

There's no harm in taking some style cues from each other, right?

Deepika Padukone and Priyanka Chopra individually are forces to reckon with. They are supremely talented in all the departments and incredibly stylish at the same time. The gorgeous ladies of B-town are busy ruling their respective worlds and carving a niche for themselves. On days, when they aren't impressing us with their acting skills, they are busy making some stunning appearances that blow our minds away. Their intriguing and bubbly personalities often resonate with the characters they play on screen and also the way they dress and present themselves. While Priyanka is more bold and edgy, Deepika plays a bit safe. But seems like it is changing for the good now. The Padmaavat actress' fashion appearances in the recent past have been distinctly different than her previous ones. They are quite daring and refreshing when compared to the previous ones. She experiments with silhouettes and colour palettes more often. And blame us for having keen observation but her attires bear some resemblance to that of Priyanka's! Also Read: Rs 2 Lakh and counting! Deepika Padukone continues to flaunt her love for high-end fashion Also Read - After getting trolled for his 'old' and 'out of shape' look, Prabhas' new suave avatar goes viral 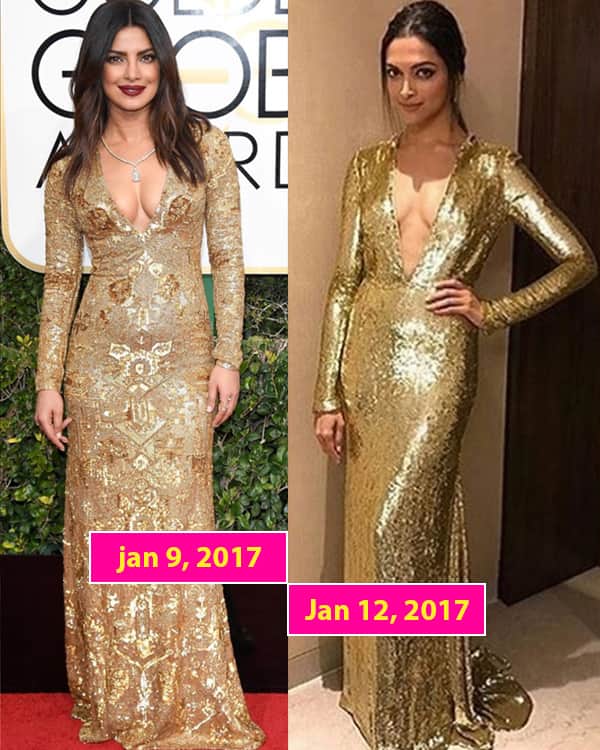 We still remember the day when Priyanka made a glittering red carpet debut at the Golden Globe Awards 2017. The golden body-con gown from Ralph Lauren, with a deep neckline, was responsible for making heads turn at the event. PeeCee's sultry appearance was still fresh in our minds when Deepika attended the Indian premiere of her Hollywood debut movie, xXx - Return of Xander Cage. The Naeem Khan design sure got all the attention thanks to the similar colour palette and plunging neckline. Though not an exact replica, Deepika's attire did remind us of Priyanka's. Also Read - Fan asks Amitabh Bachchan the reason behind endorsing paan masala; here’s what the KBC 13 host replied 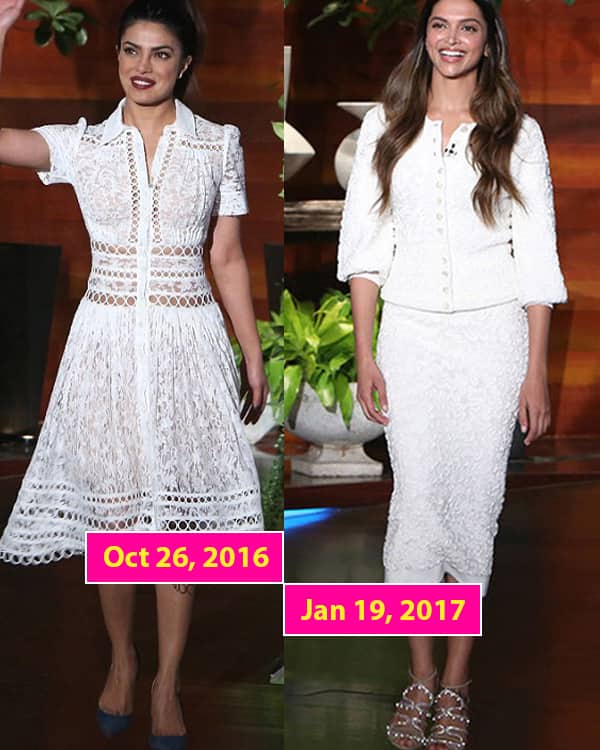 Later, while making her debut on the Ellen DeGeneres show, Deepika picked a white Michael Kors dress with matching strappy heels and loose hair. Priyanka too, had opted for a simlar white lacy dress by Zimmerman for her appearance on the same talk show. Though Deepika appeared on the show a year later, she too, picked the similar colour scheme and similarities between their attires were drawn once again. Also Read: When Priyanka Chopra made power dressing look so casual yet stunning – view pics 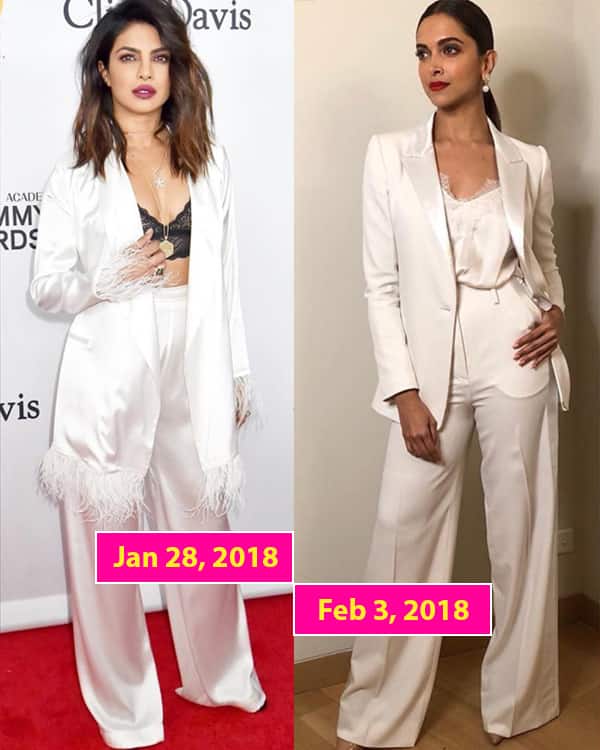 Last one being the most recent appearance, where Deepika attended the Fortune Most Powerful Women event ceremony in a white satin pantsuit from the house of Lanvin. But she wasn't the only one who tried to play bold with satin. Priyanka was the first one to experiment with it as she stepped out to attend pre - Grammy's gala 2018. We loved the way PeeCee spelled some white magic on the red carpet and the way she carried such a tricky attire with her signature enviable aplomb.

There's a saying that 'great minds think alike' and Deepika - Priyanka sure prove it right. Their similar fashion taste is a proof that they are both fashionably inclined. Also, it should be noted that our actresses don't mind taking style cues from their contemporaries on some occasions. It's quite healthy and such a comfortable environment should exist in every profession at some level.