Well, we have spotted Tiger Shroff and Disha Patani many times together on lunch and dinner dates but they have confirmed or denied their relationship. Recently, the Student of the Year 2 actor took to Instagram and started a Q and A session with his fans and admirers. While many of them asked about War, Baaghi 3, Hrithik Roshan and many things, one of the users asked, “Are you dating Disha?”. To which, Tiger gave a quirky reply and wrote, “Meri Aukaat Nahi Hai Bhai.” Also Read - Prabhudheva, Farah Khan, Remo D'Souza and more: 5 choreographers who emerged as successful directors 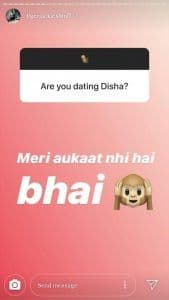 Meanwhile, the actor is currently gearing up for the promotion of his upcoming mega-budget venture War, which also stars Hrithik Roshan and Vaani Kapoor in key roles. Also Read - Pavitra Rishta fame Ankita Lokhande can be chic and desi within the snap of a finger – view pics

Expected to be one of the most expensive projects of YRF, the film is shot in six countries across the world and will show some daredevil stunts, which will be a huge treat for the fans of both the stars. Talking about the film, director Siddharth Anand recently said, “When you bring two of the biggest and the best action superstars of India in one film and pit them against each other, you need a title that justifies the promise of a massive showdown. Hrithik and Tiger will be seen going at each other ferociously and mercilessly and audiences will want to see who outwits whom in this incredible fight. WAR is the only title that could have delivered on this big promise and justifies the level of an action spectacle that the film is trying to present to audiences globally.”

Tiger Shroff will soon kickstart the shooting of Ahmed Khan's Baaghi 3, which also stars Shraddha Kapoor and Riteish Deshmukh in key roles. It is set to hit the screens in 2020. So, are you excited for these ventures? Tweet to us @bollywood_life