Ishqbaaz gets HOTTER! Shivaay and Anika are here to set your screens on fire with their steamy lovemaking scene - watch video

Fans of Ishqbaaz are going to get the treat of their lives over the next few days. Shivaay and Anika, the couple they go crazy about on the show, might just consummate their marriage. Yes, a video shared by producer Gul Khan hints that the two of them will have their moment finally which they have been trying to get since quite sometime. Now, you love their intimate scenes even when they are just looking at each other or holding each other's hands. But this video is everything you have ever imagined the two would do on their first night. If it doesn't give you gooseflesh, you aren't a true Shivika fan! Also Read - Harshad Chopda in Yeh Rishta Kya Kehlata Hai, Nakuul Mehta in Bade Acche Lagte Hain 2 and more — You'll be STUNNED to know the per day fee of these TOP TV stars

The scene has been very tastefully shot. The song playing in the background is Laal Ishq from Goliyon Ki Raasleela...Ram Leela. Nakuul Mehta and Surbhi Chandana have made the scene look so hot without even shedding clothes. That's what you expect from a love making scene but it is sensual even with clothes. The colours only added to their passion which will get to you the moment you see the video. Check it out right here... Also Read - Sharad Malhotra-Surbhi Chandna, Shivangi Joshi-Mohsin Khan and more: 11 Popular TV jodis that reunited onscreen due to fans' love

Obviously, fans are going berserk talking about it. After all, they have been waiting for it to happen since forever now. Check out the reactions right here...

The way he is looking at her?????? & Anika’s hand on Shivaay’s chest?? #Ishqbaaaz pic.twitter.com/XboFUYojc2

Shivaay hot expressions though when Anika was rubbing his chest ??? #Ishqbaaaz 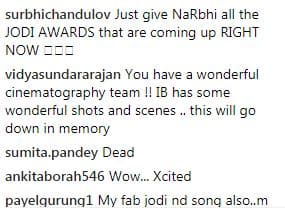 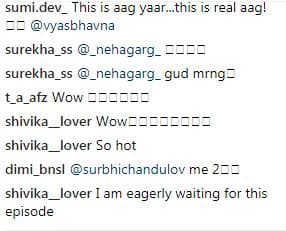 So are you watching it on a loop now?