It cost Deepika Padukone approximately Rs 2 lakh for this look, but was it worth it?

We decoded how much Deepika Padukone's ensemble for Shahid Kapoor's birthday cost and wonder if the money was well spent. Check out the total cost.

Deepika Padukone has given quite a lot of um, interesting looks in the recent past but have they all lived up to fans' expectations? Perhaps not always. Take for example her recent outings, they've been quite disastrous, here's us giving her an accurate figure of how much her outfit cost and whether it was really worth all the money. We chose DP's most recent ensemble that she wore at Shahid Kapoor's pre-birthday bash and broke down the cost of every element of the look. Oh, and the result is going to shock you. Because to put the whole look together, Rs 2 lakh was spent. Also Read - From Janhvi Kapoor to Deepika Padukone: 5 Bollywood actresses unleashes their inner Barbie in these tulle gowns

We've noticed that for quite some time now, Deepika has been giving us average swoon-worthy looks. This coming from a diva who nailed the fashion game during Tamasha and Bajirao Mastani promotions comes as a big shock. Even fans would agree with us on this one that Padukone's recent outings have been a major letdown. This recent shimmery drab look just pushed us off the cliff of hopes! We may sound very dramatic here but she definitely had the worst pick at the party. After this, we just thought of quickly scanning through what she wore and how much it's worth so we could understand whether the money spent was worthwhile or not. And guess what, Rs 2 lakh is not quite the amount anybody should spend on an outfit that makes you look like a gift wrap. Also Read - Trending Entertainment News Today – Prabhas, Amitabh Bachchan, Deepika Padukone's Project K goes on floors, Shilpa Shetty supports her husband Raj Kundra and more

Anyway, here's decoding her look. So for her 'eye catching' look, she chose to wear a Phillip Lim number. The much talked about pants which caught everyone's eyes for the amount of shimmer but definitely didn't find praise anywhere. The high-waist silk trousers had the most awkward fitting apart from being too flashy for a birthday party. It looked as if she chose the best excuse to have forgotten a present, by becoming one! The slinky tank top by H&M was just there for nobody was interested in it, courtesy the fancy pants. The entire ensemble she paired with a Gucci Sylvie mini bag and Christian Louboutin suede pumps.

Decoding Deepika's look for the night - 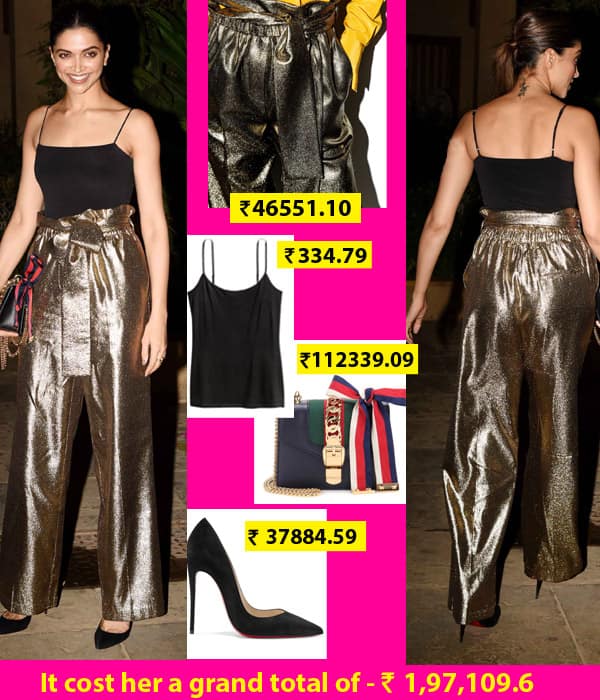 But was it worth it? She has been trolled terribly for the look! Despite having such a gorgeous body and the ability to pull off anything, DP consistently has been making bad fashion appearances. The fashion cop would like to arrest her for so many condemns! Do you think all the money spent for this look was worth it? Because we certainly don't think so. Anyway, we've put out a poll where you can cast your votes and tell us if the money on this look was well spent or not. Do write to us with your thoughts on it as well.