Salman Khan and Iulia Vantur seem to be going really strong with their relationship....

The superstar girlfriend FINALLY breaks her silence and it's not what you expected. Read on to know what she has to say....

It came as nothing short of a shocker when we got to read Iulia Vantur in an interview has clarified she's NOT in love with Salman Khan. As reported by Pinkvilla, Iulia was quoted saying, "No, we’re friends. Friends means friends, not love. Everything happens in the best time, not earlier, not later. The rest is speculation." While everyone has been discussing about the same, ever since. Little did we expect Iulia would now come out in open and rubbish this entire report. Yes! The Romanian girlfriend is miffed how media has picked up a random quote from her older interview, just to make headlines. Also Read - Worst dressed celebs of the week: Alia Bhatt, Shilpa Shetty, Iulia Vantur fail to score on the fashion charts

So this clarification happened on Iulia's Instagram feed a few hours back. A follower commented on one of her recent pictures saying, "Iulia has rubbished the rumours. She said she and Salman are only friends and no love." To which, another fan commented saying, "Then why not admitting to love. You are in his country for so long." Is when Iulia finally broke her silence stating, "When the press doesn't have new subjects, they take very old interviews just to have titles. Copy-paste era." Whoa! Can you believe it she just said that? Also Read - Eid 2021: When megastars like Shah Rukh Khan, Salman Khan and others bonded on the occasion of this auspicious festival – view pics 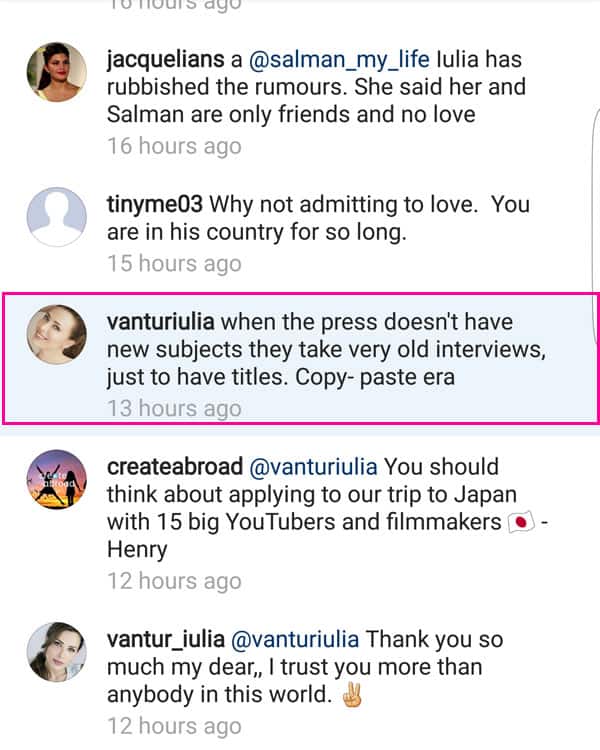 Clearly, Iulia doesn't want to friendzone Salman at any cost, even if she is yet to make her relationship official. I mean, for all that we know, she has quickly become a favourite in the Khan family. She accompanies Salman to his shoots be it in any corner of the world. She attends Salman's family functions and has also befriended his sisters and close friends. Now if this doesn't come enough to prove what kind of a relationship she shares with Salman then I dunno what will.

So haters gonna hate, Iulia is happy to be in Salman's company - whether as his special friend or a special someone! Your thoughts?