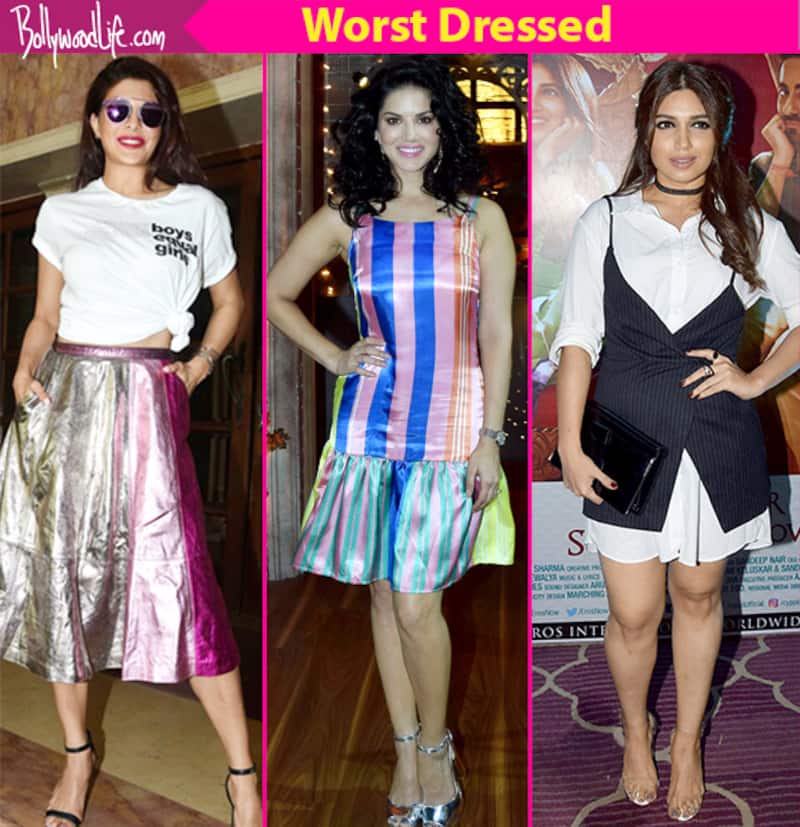 B-town beauties leave us wanting for more with their stunning looks and start a new fashion trend with the impeccable styling quite often. But there are times when these actresses step out in a hideous mix-and-match attire which will instantly make you cringe. There are a few who rarely make it to the worst-dressed list, while there are some who are regular here. This week the fashion police arrested many B-town beauties for their cringe-worthy attires and it's something you cannot afford to miss. Check out the worst-dressed celebs of the week below: Also Read - Raksha Bandhan box office collection day 2 prediction: Akshay Kumar starrer drops by 20% from day 1; fails to pick up in metros, falls in interiors too

Jacqueline Fernandez
The Judwaa 2 actress is often snapped around the city for the promotions of her upcoming film. The actress' styling during the film's promotion has failed to impress here. Recently, as Jacky was snapped at a radio station, she was seen wearing a casual slogan tee which read as 'boys equal girls.' We are totally digging the side knot on the tee here. What disappointed the fashion police was the shiny skirt which could easily be confused for a foil. The oddly shaped sunglasses did not help the attire either. We totally love the black strappy heels. Jacky could have definitely made the attire work had she opted for a high-waisted pants instead. Also Read - Laal Singh Chaddha box office collection: Exhibitors of Aamir Khan-Kareena Kapoor Khan film SLASH 1300 shows due to lack of audience; 'disastrous scenario' worries trade 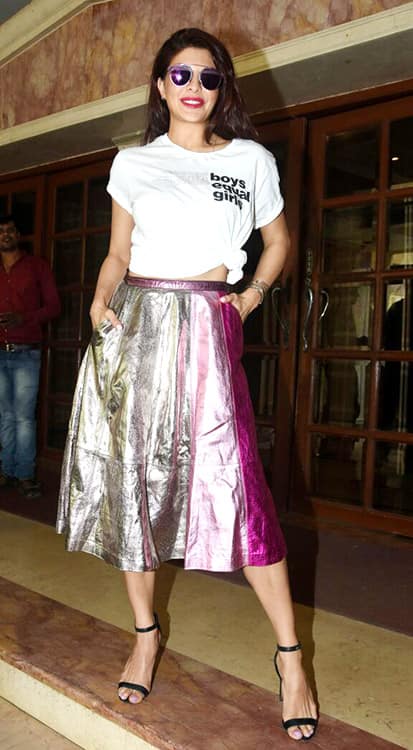 Sunny Leone
The actress looks like she is headed to a circus. While Sunny rarely disappoints the fashion police and leaves us floored with her stunning attires, this time the case was different. The actress will soon be seen with Arbaaz Khan in her upcoming film, Tera Intezaar. Sunny headed to the sets of The Drama Company for the promotions of her film and has let the fashion police down with this attire. The multicolour striped dress has too much going on. One could easily confuse this attire with wrapping paper. The frill towards the bottom of the dress too was a complete put-off. Bhumi Pednekar
The actress manages to get the monochrome attire all wrong. Bhumi was recently snapped at the success party of her film Shubh Mangal Savdhan and failed to carry off the slip dress. Bhumi was seen wearing a white full-sleeved dress with a striped black slip dress over it. The dress looks more like an apron and the shiny black clutch too doesn't go with the attire. To make things worse, Bhumi paired her attire with unflattering transparent shoes for the party. 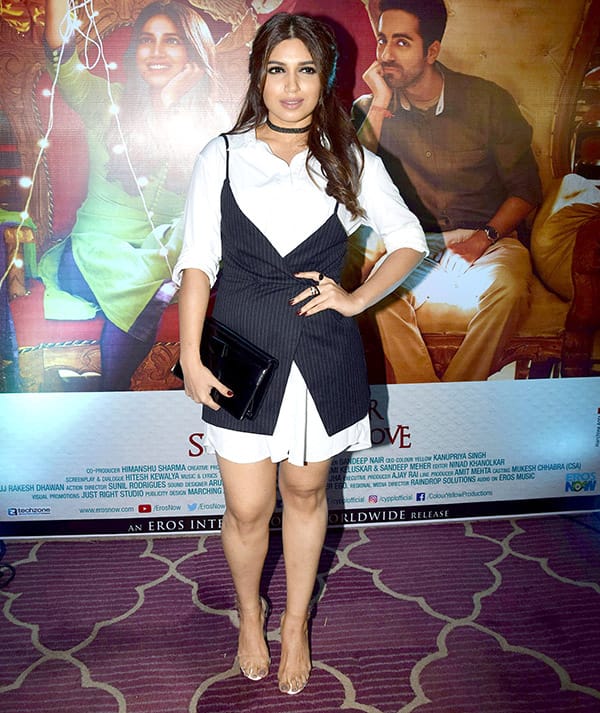 Taapsee Pannu
The Judwaa 2 actress is also seen promoting her upcoming film along with Jacqueline Fernandez and Varun Dhawan. Taapsee was recently snapped at Mehboob studios as she stepped out for promotions. She has majorly disappointed the fashion police with this attire. Wearing the cold shoulder top with a blue and red skirt was surely a wrong call. The black tie-up gladiators are too funky for the chic top here. Apart from the mismatched outfit, Taapsee's different earrings too fail to impress us. 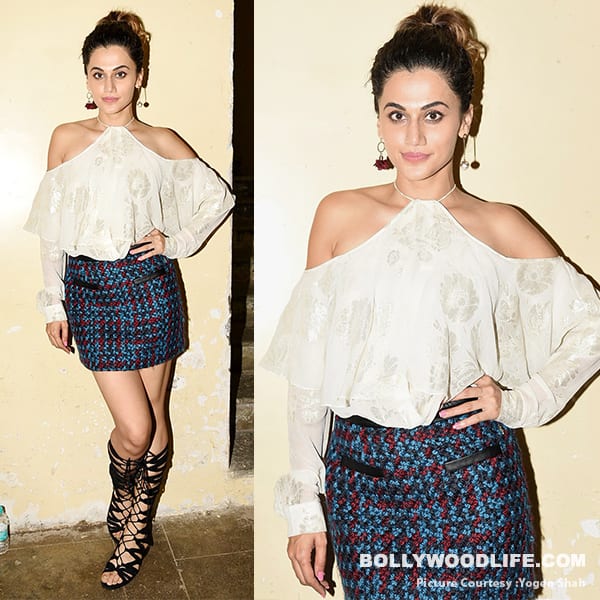 Diana Penty
The actress is currently busy promoting Lucknow Central with Farhan Akhtar. While B-town hotties are seen focusing on their promotion style equally as they would for a red carpet event, Diana stepped out wearing this disaster and we can't help but wonder why. This semi-sheer attire with abstract print is plain blah. This picture of Diana proves that she needs to hire a stylist ASAP. Also Read: Are you digging Kangana Ranaut’s new look? Well it will cost you more than a return trip to the United States 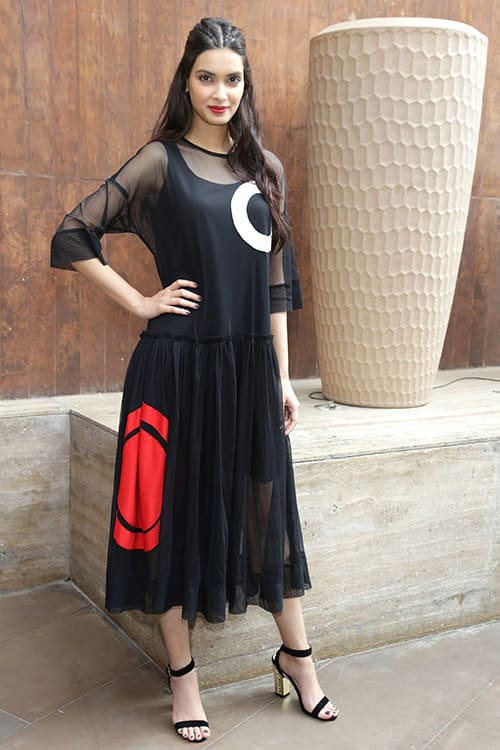 These five celebs make it to list of worst-dressed celebs this week. What do you think about these attires? Tell us in the comments box below...